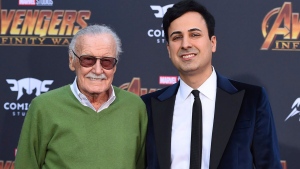 In this April 23, 2018, file photo, Stan Lee, left, and Keya Morgan arrive at the world premiere of "Avengers: Infinity War" in Los Angeles. Attorney Alex Kessel entered a not-guilty plea in Los Angeles Superior Court on Monday, July 2, 2018, for Morgan, who is charged with calling 911 to report that detectives and a social worker conducting a welfare check on the 95-year-old Lee were burglars. (Photo by Jordan Strauss/Invision/AP, File)

LOS ANGELES -- A former business manager of Stan Lee has been charged in California with five counts of elder abuse involving the late Marvel Comics mastermind.

A request for a restraining order filed last year by Lee's daughter alleged Keya Morgan was manipulating the mentally declining Lee, preventing him from seeing family and friends, and trying to take control of his money and business affairs.

The felony charges filed Friday by Los Angeles County prosecutors against the 43-year-old Morgan include theft, embezzlement, forgery or fraud against an elder adult, and false imprisonment of an elder adult. A misdemeanour count also alleges elder abuse.

The charges date to June, when Morgan was working closely with Lee, who died in November.

A warrant has been issued for the arrest of Morgan. His attorney Alex Kessel said Morgan is not guilty.

"He has never abused or taken advantage of Mr. Lee in any way," Kessel said in an email. "We expect him to be completely exonerated of all charges."

In June, attorneys for the 95-year-old Lee and his daughter Joan C. Lee were granted a restraining order against Morgan that barred contact with Lee and revealed that police were investigating Morgan for elder abuse.

Lee, co-creator of such characters as Spider-Man, Iron Man and The Incredible Hulk, was for decades the face of Marvel Comics. His movie cameos, still emerging after his death in films like "Avengers: Endgame," are a beloved element of the Marvel Cinematic Universe.