Hemsworth officially seeks divorce from Cyrus after 7 months of marriage 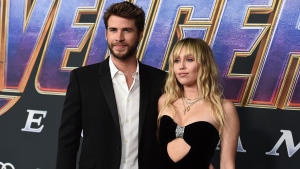 In this Monday, April 22, 2019, file photo, Liam Hemsworth, left, and Miley Cyrus arrive at the premiere of "Avengers: Endgame" at the Los Angeles Convention Center. (Photo by Jordan Strauss/Invision/AP, File)

LOS ANGELES - Liam Hemsworth is seeking a divorce from Miley Cyrus after seven months of marriage.

The 29-year-old Australian actor filed for the dissolution of his marriage to the 26-year-old American pop star in Los Angeles Superior Court on Wednesday.

Hemsworth, whose attorney Laura Wasser has been involved in many major stars' divorces, cited irreconcilable differences as the reason for the split.

The two were an on-again, off-again couple for more than a decade before marrying in December. They announced their separation on Aug. 10.

They have no children but said in the statement announcing their separation that they will remain “dedicated parents to all of their animals they share.”