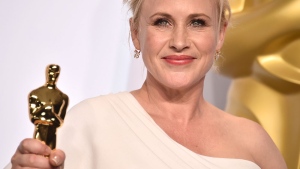 LOS ANGELES - Patricia Arquette is having a “wonderful time” in her acting career, but the Emmy winner said she is still struggling with the death of her sister.

Arquette said backstage Sunday night that she is grieving heavily after Alexis Arquette died at the age of 47 in 2016. She made a tearful tribute to Alexis during her acceptance speech at the Microsoft Theater after she won best supporting actress in a limited series for her role in the Hulu series “The Act.”

“I think as an actor or actress, we try to act like everything is fine,” said Arquette while holding her trophy backstage. “But the truth is, I've been having this heavy grief. I feel like I'm just starting the process. I really miss my sister.”

Alexis, who was transgender, died from a heart attack and battled HIV for 29 years, according to her death certificate. She memorably played a trans sex worker in “Last Exit to Brooklyn” and a Boy George impersonator in “The Wedding Singer.”

During her acceptance speech, Arquette urged to end to the persecution of trans people, and backstage, called out comedians who joke about them: “That's not acceptable.”

It's the second Emmy win for Arquette, who won best lead actress in a drama for her role on “Medium” in 2005. She also is an Oscar winner.