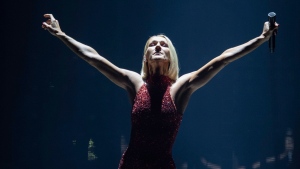 TORONTO - A French film inspired by the life of Quebec chanteuse Celine Dion is causing a stir on social media.

The trailer for “Aline, the Voice of Love” dropped last fall but has gained renewed attention after news the drama will screen out of competition at next month's Cannes Film Festival.

French actor-singer-filmmaker Valerie Lemercier directed and also stars as the protagonist, whose life trajectory appears to mirror that of Dion and her late husband Rene Angelil.

Many on Twitter remarked that the the trailer features Dion's songs and details about her life, including her storybook rise from humble Quebec roots, but not her name.

Instead, the lead character is named Aline Dieu and her manager-turned-husband is named Guy-Claude.

Quebec actor Sylvain Marcel plays Guy-Claude in the film, which isn't the only screen project that's attempted to profile her life. In 2019 a publicist said Quebec director Marc-Andre Lavoie was set to oversee the English-language film “Celine Before Celine.”

That feature was sanctioned by Dion's family and her nephew, Jimmy Dion, had signed on as a screenwriter, according to the Hollywood Reporter.

And in 2008 the CBC-TV movie “Celine” aired with Christine Ghawi in the lead role.

The Cannes festival will run in person with strict COVID-19 safety measures from July 6 to 17.