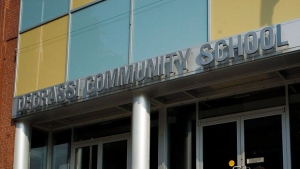 The set of "Degrassi" is seen here in this Thursday, June 26, 2012 photo. THE CANADIAN PRESS/Aaron Vincent Elkaim

TORONTO - Beloved Canadian teen drama “Degrassi” will be back in session next year as a darker hour-long TV series.

It's described as an “evolution” of the “Degrassi” story that stays true to the original but “promises fans a journey into exciting new territory, both creatively and dramatically.”

The 10-episode season will shoot in Toronto this summer and be produced in partnership with Canadian production company WildBrain Ltd., who own the rights to the franchise.

Both Azzopardi and Cohen are alumnae of the Degrassi universe having worked together as writers on a 2009 episode of “The Next Generation” titled “Heat of the Moment,” which dealt with bullying.

The show's longtime creators Linda Schuyler and Stephen Stohn issued a joint statement saying “the time is perfect to pass the baton” to new leaders.

“We worked with Lara and Julia as writers on Degrassi in the early stages of their careers, so we are particularly proud of how their careers have soared over ensuing years,” they wrote.

WildBrain says plans to make “Degrassi” available to Canadian viewers are still being ironed out.

“We don't have news to share at this time, but we look forward to making additional announcements down the road about availability of the new series in Canada and other territories,” spokesman Shaun Smith said Thursday in an email.

HBO Max's revamp marks the latest version of the popular series which began in 1979 as “The Kids of Degrassi Street,” a run of CBC after-school specials that spun off into “Degrassi Junior High” and “Degrassi High” in the 1980s.

In 2001, “Degrassi: The Next Generation” sparked a renaissance for the franchise that lasted for 14 seasons, ending its run on MTV.

“Degrassi: Next Class” was the latest revamp in 2016 and aired two seasons on Family Channel in Canada and globally on Netflix.