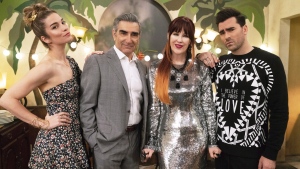 The cast of the television show "Schitt's Creek," Annie Murphy (left to right) Eugene Levy, Catherine O'Hara and Daniel Levy is shown in a handout photo. (THE CANADIAN PRESS/HO-CBC)

TORONTO - Fans of the bold wardrobe featured on “Schitt's Creek” can soon snag some of the show's designer duds for themselves.

The CBC-TV comedy has partnered with a Toronto consignment shop to sell hundreds of pieces online that include luxury brands Balenciaga, Alexander McQueen and Dsquared2.

VSP Consignment says the 800 items have been drawn from all six seasons of the series, and include pieces that never made it to air. The show centres on a once-rich family whose lavish outfits are among the few remnants of their previously privileged life.

“With Dan's character there's a lot of Rick Owens and Givenchy and Neil Barrett, for example. And then with Moira she does a lot of structural, obviously black-and-white pieces, and there was a lot of Proenza (Schouler), a lot of MSGM ... also Balenciaga and a lot of McQueen.”

One of the standout pieces is a gold feathered and sequined gown by Pamella Roland priced at nearly $5,000. More affordable keepsakes include a “Cafe Tropical” baseball cap for $78 that references the town's fictional diner, and a “Rose Video” polo shirt for $98 that references the defunct video rental business the family once owned.

“If you're a fan of the show those are kind of the pieces that are a lot more accessible to purchase (as) memorabilia,” notes Granados, who says the average price hovers around $398.

The online-only sale begins noon Thursday at vspconsignment.com, although a VSP spokeswoman says a handful of contest winners will get early access Tuesday.

Granados says they're expecting interest to extend well beyond Canadian fashionistas since “Schitt's Creek” has also developed a U.S. following on Pop TV, and globally through Netflix.

The collection includes eye wear, men's suits, footwear and hand bags. Eagle-eyed super fans might be able to spot mementoes among another 200 “lower end” items that Granados says have been dispersed through VSP's regular collection and are not labelled as “Schitt's Creek” wardrobe.