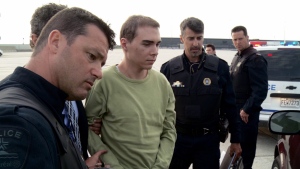 Luka Rocco Magnotta is taken by police from a Canadian military plane to a waiting van in Mirabel, Que., on Monday, June 18, 2012. (Montreal Police)

A three-part documentary series about the online sleuths who helped track down the infamous killer Luka Magnotta is coming to Netflix.

The streaming service says the series will follow the story of internet users across the world who jumped into action after a video of an unknown man killing two kittens was posted online.

The online manhunt intensified as more disturbing videos were posted, including the infamous clip showing the dismemberment of 33-year-old university student Jun Lin.

The now 37-year-old Magnotta was convicted in December 2014 of first-degree murder in the slaying of Lin, as well as several other counts, and is currently serving a life sentence.

At his trial, Magnotta admitted to killing and dismembering Lin but had sought to be found not criminally responsible by way of mental disorder.