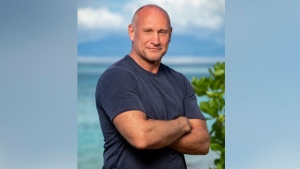 Former NHL player Tom Laidlaw, shown in a handout photo, competes on Survivor: Island of the Idols, when the Emmy Award-winning series returns for its 39th season, Wednesday, Sept. 25 on the CBS Television Network. THE CANADIAN PRESS/HO- Robert Voets/CBS Entertainment

TORONTO - Former NHL defenceman Tom Laidlaw is among the 20 castaways facing off in the new edition of “Survivor.”

Global says the 61-year-old athlete is the first Canadian to ever appear on the long-running series, which launches its 39th edition Wednesday with a 90-minute episode on Global and CBS.

Laidlaw began his 10-year on-ice career with the New York Rangers in 1980, and joined the Los Angeles Kings in 1986.

The Brampton, Ont.-native now lives in Greenwich, Conn. His bio for “Survivor” lists his pet peeves as “people driving slow in the fast lane” and says the three words that describe him are: disciplined, dedicated, and stubborn.

Laidlaw says he can win the reality series because he knows how to build an alliance, win challenges and “then do whatever it takes to win.”

This time around castaways will dodge weekly elimination challenges in Fiji's Mamanuca Islands in their bid to claim a $1-million prize and the title of Sole Survivor.

This report from The Canadian Press was first published Sept. 24, 2019.