"It" is tops again; "Hustlers" full of flash at box office 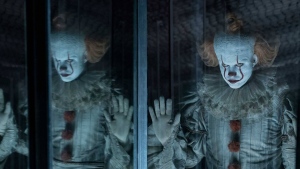 Pennywise the Dancing Clown can be seen in a mirror room in this scene from 'It: Chapter Two.' (Warner Bros. Pictures)

LOS ANGELES - It wasn't quite enough to take down Pennywise the clown, but Jennifer Lopez and the scheming strippers of “Hustlers” topped even its high expectations at the weekend box office.

“It: Chapter Two” brought in $40.7 million to keep the top spot in its second week and has earned a total of $153.8 million. The original had earned more than $200 million at the same point two years ago.

“Hustlers,” riding stellar reviews, festival buzz and Oscar talk for Lopez, earned $33.2 million, a record for a film from STX Entertainment, which was launched less than five years ago.

Gerard Butler's “Angel Has Fallen” finished third in its fourth week of release.

Newcomer “The Goldfinch” landed with a thud, bringing in just $2.6 million and finishing in the eighth spot.