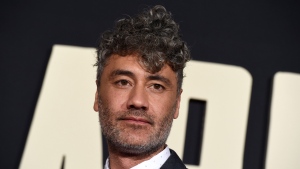 LOS ANGELES -- Drawing on his own Jewish heritage and experiences growing up surrounded by prejudice, writer-director-actor Taika Waititi was excited to make a movie against hate through a satire of the Nazi culture at the height of WWII, until he saw himself dressed as Adolf Hitler for the first time. He said he felt "shame and embarrassment."

"Jojo Rabbit" tells the story of a boy in the Hitler Youth army who discovers that his mother is hiding a Jewish girl in their house and things get complicated as the boy's imaginary friend is Hitler himself. Waititi plays the imaginary Hitler in the movie, which stars Scarlett Johansson, Sam Rockwell, and Rebel Wilson, among others. Wearing a Hitler costume was jarring, but Waititi said he eventually "came to the conclusion that it's not Hitler.

"This character is conjured from the mind of a 10-year-old. So, he is a 10-year-old in a grown-up's body, and also one way of me like I think disempowering Hitler, was by taking over his body and putting those clothes on and taking his moustache and his haircut. And then it felt in a way like I had possessed him and then I could, I could control him and do whatever I wanted. I could be you know; I could be really nice, or I could be even more of an idiot. And you know I could be like this real kind of clumsy buffoon and that's what I enjoy. I enjoyed that the most really was like being able to ridicule him from within his clothes, I guess."

The root of the film began with the novel "Caging Skies" by Christine Leunens. While the book is more dramatic, Waititi decided to use that as a base while adding comedic elements.

As troubling as it was for Waititi to see himself dressed as Hitler, it was also disturbing for his cast to be directed and ordered around by someone wearing a Hitler costume. "Game of Thrones" actor Alfie Allen walked on to set for the first time to find his director already in full costume.

"It was definitely an arresting image to be greeted by your director dressed as Hitler. And so yeah, he kind of was conscious of that. At times I think he would know that if he was getting us a little bit irate that he would have to kind of reel in because it was genuinely frightening for people," Allen said.

Waititi remembers Johansson, who plays the young Nazi boy's mother, rolling her eyes at his costume. But what concerned Waititi was the emotional reaction of his young star, Roman Griffin Davis

"He's so empathetic that he had done all this research of what the victims of World War II had gone through and stuff and I think he was so struck with that that when he saw me, he got really emotional and I got really worked up because he associated that -- and rightly so -- he associated that image with murder of millions and millions of people as he should associated it," Waititi said. "But it was just such a pure reaction from someone who's from a pure heart."

The movie is being released on Friday in theatres across the United States.