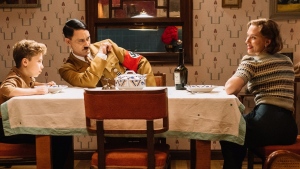 Jojo (Roman Griffin Davis) has dinner with his imaginary friend Adolf (writer/director Taika Waititi), and his mother, Rosie (Scarlet Johansson) in a handout photo from the film "Jojo Rabbit." The film has won the People's Choice Award at the Toronto International Film Festival. THE CANADIAN PRESS/HO-TIFF- Kimberley French MANDATORY CREDIT

TORONTO - The Toronto International Film Festival capped off with a surprise win for Taika Waititi's “Jojo Rabbit,” which picked up the People's Choice prize on Sunday, putting a global spotlight on the Nazi satire ahead of awards season.

The film, set during the Second World War, follows a German boy who's training in a cartoonish Hitler Youth camp before discovering that his mother is hiding a young Jewish girl in their attic. It stars Scarlett Johansson, Rebel Wilson and director Waititi as a flamboyant version of Adolf Hitler, who's the boy's imaginary friend.

“Jojo Rabbit” was a hot topic of conversation at the festival, driven partly by its mixed reception from film critics. It currently holds a 52 out of 100 score on Metacritic, which tallies reviews. Some suggested portraying Nazis as buffoons fell out of step with the current social climate.

But TIFF audiences seemed to disagree, giving the off-beat comedy a boost that is often a predictor of Academy Awards success. “Jojo Rabbit,” which hits theatres in October, beat out Noah Baumbach's “Marriage Story,” the first runner up, and Bong Joon-ho's “Parasite.”

The $15,000 People's Choice prize is sponsored by Grolsch, and several previous winners have gone on to win the Oscar for best picture, including last year's “Green Book,” “12 Years a Slave,” “The King's Speech” and “Slumdog Millionaire.”

Even People's Choice picks that don't grab the top Oscar trophy often wind up major players in the awards race. Recent victors “La La Land,” “Room” and “Three Billboards Outside Ebbing, Missouri” all scooped up honours at other major awards events, including the Golden Globes.

Waititi is already a hot commodity in Hollywood. The New Zealander is best known for directing Marvel's 2017 blockbuster “Thor: Ragnarok” and critical favourites “What We Do in the Shadows” and “Hunt for the Wilderpeople.”

He's also directed an episode of the upcoming Star Wars universe spinoff “The Mandalorian” for Disney Plus, and will star in a sequel to DC Comics' supervillain saga “Suicide Squad.”

After its TIFF premiere, Waititi defended “Jojo Rabbit” against some of the naysayers who questioned his silly portrayal of Nazis.

“In a way, that kind of thing makes me feel that I've done my job, and that I've accomplished what I've set out to do, which is to keep the conversation going and make something that isn't too safe,” he told The Canadian Press several days before the film's win.

“I'm not sure if you can say this film is a challenging approach to the subject. I think it's pretty standard fare when it comes to trying to remind people that being a Nazi is not cool. That is the message.”

Mackenzie King is portrayed as a timid future leader with a fetish for women's footwear, an idea Rankin imagined after poring through the real prime minister's diaries.

“If you read his journal, there's a lot of agonized entries about how he's done some terrible deed, or committed some sin ... He crosses things out, he rips out pages, and he can't even in this private space admit what he has done. Historians have their educated guess about what that might be, but inevitably we have to fill in the blanks, so that's what I did.”

“The Twentieth Century” will be released in theatres later this year.

Other winners on Sunday included Spanish director Galder Gaztelu-Urrutia's “The Platform,” which picked up the Grolsch People's Choice Midnight Madness Award after being acquired by Netflix. The futuristic classism allegory is set inside a prison where each inmate awaits their daily meal that descends from the upper levels of the building - each prisoner taking their share of the meal before the cell below them gets whatever scraps are left over.

And Syrian-born Feras Fayyad's “The Cave” won the Grolsch People's Choice Documentary Award. The two-year project had Fayyad returning to his war-torn homeland to follow a team of female doctors who spend their lives dedicated to treating casualties in an underground hospital.

The $30,000 Canada Goose Award for best Canadian feature film went to Sophie Deraspe's “Antigone,” a modern take on Sophocles' Greek tragedy set in Montreal. The Riviere-du-Loup, Que,-raised director's film was praised by critics, with many pointing out newcomer Nahema Ricci as a standout.

Oualid Mouaness' “1982” won the NETPAC Award, selected by a jury from the Network for the Promotion of Asian Pacific Cinema.

In the short film categories, the best $10,000 short film award went to Lasse Linder's “All Cats Are Grey in the Dark,” and the $10,000 best Canadian short film was award to Chloe Robichaud's “Delphine” and best short. Both prizes are presented by IWC Schaffhausen.

Jojo (Roman Griffin Davis) has dinner with his imaginary friend Adolf (writer/director Taika Waititi), and his mother, Rosie (Scarlet Johansson) in a handout photo from the film "Jojo Rabbit." The film has won the People's Choice Award at the Toronto International Film Festival. THE CANADIAN PRESS/HO-TIFF- Kimberley French MANDATORY CREDIT