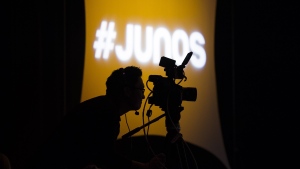 A videographer looks through his camera during the 2020 Juno Award nominee press conference in Toronto on January 28, 2020. Organizers behind the annual celebration of Canadian music say they've decided to "hold off indefinitely" on revealing who picked up this year's Junos trophies, as the country deals with the COVID-19 pandemic. THE CANADIAN PRESS/Nathan Denette

TORONTO - Organizers of the Juno Awards say they're postponing this year's 50th anniversary show in Toronto until June 6 as COVID-19 cases rage.

It's the second time the country's biggest night in music has been pushed as the Canadian Academy of Recording Arts and Sciences contends with ever-changing Ontario rules meant to slow the spread of the virus.

Already the annual celebration had been moved to May 16 from an originally planned date in mid-March under hopes that warmer weather - and a vaccine rollout - might allow some performances to be held outdoors with safety efforts in place.

However, the province has seen a spike in COVID-19 cases more recently, with a larger proportion coming from more contagious variants that led to more hospitalizations and pushed the province to issue stay-at-home orders.

The latest Junos delay was made “out of an abundance of caution in response to the evolving COVID-19 pandemic,” CARAS said Wednesday in a statement.

Ontario's stay-at-home order took effect April 8 and will last until at least early May, but experts say those measures could extend if COVID-19 case numbers don't abate.

Staging the Junos this year is complicated by not only COVID-19 case counts, but also how Ontario categorizes certain forms of entertainment under its pandemic response framework.

As a nationally televised broadcast put on by Insight Productions, the Juno Awards fall under Premier Doug Ford's current COVID-19 rules for film and TV. But the Junos organizers had hoped to present some of this year's music moments inside prominent local venues, including Toronto's Horseshoe Tavern.

That move would put the Junos in an unusual spot, since the show technically would be allowed to shoot under the Ford government's rules, but would be encouraging musicians to carry on inside concert venues, which the province hasn't otherwise allowed them to do.

Earlier this month, several venue owners called on the province to reconsider the COVID-19 rules and enforce consistent measures across the board for all production work, whether it's film, TV or live music broadcast online.

This year's Junos was originally planned as a splashy golden anniversary celebration with thousands of people in Toronto's Scotiabank Arena alongside the country's biggest music stars. Those expectations were dashed over the past year as the reality of COVID-19 made a regular gathering impossible.

The Weeknd leads the 2021 Junos with six nominations while Toronto pop singer/songwriter JP Saxe, Justin Bieber and Jessie Reyez all have five nods.

Details on performers, presenters and Juno Week virtual events will be revealed in the coming weeks, CARAS said.