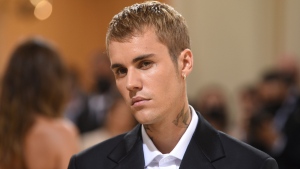 Justin Bieber will be the Canadian to watch at the Grammy Awards tonight.

The pop superstar from Stratford, Ont., leads the homegrown contenders with eight nominations, including both record and song of the year for his chart-topping single “Peaches,” which he recorded with Toronto's Daniel Caesar.

His newest full-length release “Justice (Triple Chucks Deluxe),” is in the running for album of the year, another top category. The Grammys announced Friday that Bieber would also perform.

Several other Canadians could see big wins at the Grammys, which takes place this year in Las Vegas.

And despite his boycott of the Grammys, Toronto singer the Weeknd is nominated three times for contributions to other artists' projects. That includes a nod in best melodic rap performance for Kanye West's “Hurricane,” and for appearances on Doja Cat's deluxe edition of “Planet Her” and West's “Donda,” both up for album of the year.

Other multiple nominees include composer Yannick Nezet-Seguin, whose three nods are in classical categories.

Many of the Grammy categories with Canadian nominees will be announced during a ceremony that's streamed on the official website at 3 p.m. ET before the televised event.

The 64th Grammy Awards main show will be hosted by Trevor Noah, and airs tonight on Citytv and CBS.