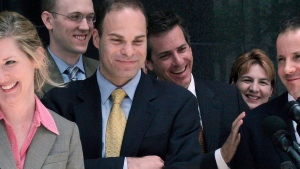 In this May 25, 2006, file photo, federal prosecutors Kathryn Ruemmler, left, Sean Berkowitz and John Hueston address the media outside the courthouse after the verdicts were delivered in the trial of former Enron executives Ken Lay and Jeff Skilling in Houston. Berkowitz is defending Lori Loughlin and her husband, Mossimo Giannulli, in 2020 against federal allegations that they bribed their daughters' way into the University of Southern California. (AP Photo/Pat Sullivan, File)

BOSTON -- After winning guilty verdicts against top Enron executives in one of the most high-profile cases of corporate fraud, the lead prosecutor declared: “No matter how rich and powerful you are, you have to play by the rules.”

More than a decade later, that same lawyer, Sean Berkowitz, is fighting to clear “Full House” star Lori Loughlin and her fashion designer husband, Mossimo Giannulli, of charges that they used their wealth and privilege to skirt the rules in the college admissions process.

And he will be a formidable foe for prosecutors looking to put the famous couple behind bars, former colleagues say.

“Sean is a prosecutor's worst nightmare,” said Jeffrey Cramer, who was in the U.S. attorney's office with him in Chicago. “If Sean has anything to work with at trial, he can show reasonable doubt.”

Berkowitz and the couple's other high-powered attorneys are hoping to help Loughlin and Giannulli avoid the same fate as other prominent parents who've landed in prison for participating in a college admissions cheating scheme that has rocked the world of higher education.

A Chicago-area native who led the special Justice Department task force that investigated the Enron scandal, Berkowitz has a reputation for being fearless yet cool-headed and a master at navigating complex cases. Lawyers who've worked with him say he's meticulous and unflappable with a Midwestern charm that makes him persuasive to juries.

“He's very comfortable in the courtroom,” said David Hoffman, who worked as a federal prosecutor alongside him and remains a close friend.

“He's very genuine, he's very relaxed ... and that I think comes across to everyone who's with him,” said Hoffman, now a white collar lawyer in Chicago.

Berkowitz, 52, now a partner at Latham & Watkins in Chicago, declined to be interviewed by The Associated Press.

Loughlin and Giannulli hired him quickly after they were arrested last March on charges that they paid $500,000 to get their daughters into the University of Southern California as fake crew recruits.

Other prominent attorneys on their defence team include BJ Trach, also from at Latham & Watkins, who previously worked as a federal prosecutor in Boston and now has other big-name clients such as General Electric and tobacco giant Philip Morris. Trach, 42, is known as a savvy young lawyer who's friendly with the prosecutors at the Boston courthouse, where Loughlin and Giannulli are scheduled to stand trial alongside six other parents in October.

The defence team has their work cut out for them.

Nearly two dozen other parents, including fellow actress Felicity Huffman, have already admitted to paying bribes in the scheme, and several have been sentenced to prison.

Prosecutors have emails and recorded phone calls between Loughlin and Giannulli and the admitted mastermind of the bribery scheme, Rick Singer. Documents that prosecutors have revealed include a bogus resume presented to USC that falsely claims their younger daughter, Olivia Jade, rowed in such prestigious competitions as the Head of the Charles. Singer and the former coach authorities say Singer paid to create the fake athletic profile for Olivia Jade are co-operating with investigators and will likely testify against the couple at trial.

But Loughlin and Giannulli say they believed the checks they wrote were legitimate donations that would support Singer's charity or go directly to USC as a fundraising gift. Their lawyers have accused prosecutors of withholding information that could support the couple's claims of innocence, including notes from Singer's iPhone in which he says the FBI told him to lie and say that he told parents that the payments were bribes.

Berkowitz says that information is exonerating, and Cramer said the defence attorney is an expert at turning any problem with a case into a big advantage.

“With every case there are problems, and this case is no exception,” said Cramer, now executive director of the Berkeley Research Group consulting firm. “And if there are problems in a case, and you have a defence lawyer who is as good as Sean, those little gaps in cases sometimes can become big holes for you to run through.”

Outside the courtroom, Berkowitz is an avid runner who used to be a part owner of a now-shuttered rock club on Chicago's northwest side. He's married to journalist Bethany McLean, who co-authored “The Smartest Guys in the Room,” about Enron's corruption and downfall.

Berkowitz was tapped in 2005 to be director of the Enron Task Force and was the lead prosecutor in the trial against founder Kenneth Lay and former chief executive Jeffrey Skilling for actions that led to the energy company's extraordinary meltdown.

His prosecuting partner at the Enron trial, John Hueston, is now defending another high-profile parent in the college admissions case: William McGlashan, who co-founded an investment fund with U2 Singer Bono. McGlashan denies participating in the scheme and is scheduled to go on trial in January.

During the monthslong trial in Houston, Berkowitz impressed even his adversaries with his ability to present the complicated case in a way jurors could grasp.

“He was remarkable in his ability to maintain a simple message for the jury,” said Chip Lewis, one of the attorneys for Lay. “It would have been very easy to lose the jury in all those details.”

In his final pitch to jurors, Berkowitz showed them a poster with the words “Truth” and “Lies” written in black and white. “You get to decide whether they told the truth, or they told lies,” he said.

“Don't go back and let the defendants, with their high-paid experts and their lawyers, buy their way out of this,” he told them. “You can't buy justice. You have to earn it.”