Lawyers wonder why Loughlin, Giannulli have not expressed any regret 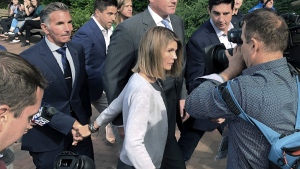 In this Aug. 27, 2019, file photo, Lori Loughlin departs federal court with her husband, clothing designer Mossimo Giannulli, left, in Boston, after a hearing in a nationwide college admissions bribery scandal. Loughlin and Giannulli have agreed to plead guilty in a video arraignment scheduled for Friday, May 22, 2020, to charges of trying to secure the fraudulent admission of their two children to the University of Southern California as purported athletic recruits. (AP Photo/Philip Marcelo, File)

BOSTON -- Since “Full House” star Lori Loughlin and her fashion designer husband, Mossimo Giannulli, were arrested last year on charges that they bribed their daughters' way into college, the famous couple has been consistent about at least one thing: their silence.

Loughlin, who gained fame for her role as the wholesome Aunt Becky in the sitcom that ran from the late 1980s to the mid-1990s, and Giannulli have not made any public statements since they were charged with paying half a million dollars to get their daughters into the University of Southern California - or surprisingly decided to plead guilty despite their lawyers' repeated claims that they were innocent.

And unlike every other prominent parent who has been sentenced so far in the college admissions cheating scheme, the couple has not submitted letters expressing regret or notes of support from family and friends to the judge who will decide their fate on Friday - a move lawyers describe as puzzling.

“I don't know why you wouldn't want to at least submit something to ensure that this goes the way you want it to,” said Matthew Galluzzo, a criminal defence attorney in New York who's not involved in the case. “Why not some letters of support from family? Why not a letter from them with some remorse or whatever to make sure it goes through?”

Unlike most plea agreements, in which the judge remains free to decide the defendant's sentence, Loughlin and Giannulli's proposed prison terms are binding if the judge accepts the deals.

Loughlin and Giannulli will appear before the Boston federal court judge during separate sentencing hearings held via videoconference because of the coronavirus pandemic.

The couple's silence stands in stark contrast to other parents who've admitted to charges in the so-called “Operation Varsity Blues” case, including fellow actress Felicity Huffman, who was sentenced to two weeks behind bars for paying $15,000 to rig her daughter's entrance exam score.

When Huffman agreed to plead guilty less than a month after her arrest, she released a statement accepting full responsibility and expressing “deep regret and shame.” She showed up for her court appearances stone-faced, clutching the hand of her brother.

Before she was sentenced, Huffman filed a lengthy letter to the judge describing how she “deceived the educational community,” “betrayed” her daughter and “failed” her family. Her husband, actor William H. Macy, and her “Desperate Housewives” co-star Eva Longoria also wrote letters to the judge showing support and detailing the impact the charges had on her life.

Loughlin and Giannulli have taken a decidedly different path. In her first appearance in Boston after her arrest, Loughlin smiled for the cameras, waved at fans outside the courthouse and shook hands with prosecutors inside.

She and Giannulli fiercely fought the allegations for months, with their lawyers accusing prosecutors of withholding evidence that would exonerate them. Their decision to plead guilty to paying $500,000 to get their daughters admitted to USC as crew recruits - even though neither girl was a rower - came shortly after the judge rejected their bid to dismiss the case. At their plea hearing, they made no comments other than to answer questions from the judge.

Prosecutors filed a memo on Monday urging the judge to accept the deals, calling Giannulli “the more active participant in the scheme,” while they said Loughlin “took a less active role, but was nonetheless fully complicit.” The defence almost always also files its own memo ahead of sentencing to push for a favourable outcome, but Loughlin and Giannulli's lawyers haven't.

Experts say the couple may feel doing so would just attract more negative media attention and isn't worth it since there is no disagreement between prosecutors and the defence on the appropriate sentence. They may also be concerned that saying the wrong thing could blow up their deal with prosecutors, lawyers say.

With her fame, Loughlin may just not want to make public the intimate details of her life that letters of support often go into, said Brad Bailey, a Boston criminal defence attorney and former federal prosecutor. Just about any experienced lawyer would want to file a sentencing memo or letters of support to avoid any risk of the judge rejecting the deal, he said.

“My guess is this is probably being done at the instruction of the defendants and against the inclination of their attorneys,” Bailey said.