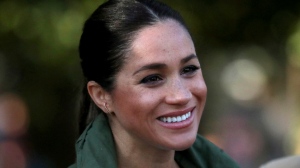 LONDON - British royal Meghan, the Duchess of Sussex, has sued a tabloid newspaper that she claims illegally published a personal letter she wrote.

A spokeswoman for the law firm handling the case told Britain's Press Association the lawsuit alleges the Mail on Sunday's “intrusive” publication of the letter was copyright infringement, misuse of private information and a violation of data protection law.

Meghan was known as the American actress Meghan Markle before she married Prince Harry in May 2018. Harry accused the Mail on Sunday of editing out parts of the letter in “an intentionally destructive manner” to “manipulate” readers and provide an inaccurate characterization of his wife.

He said in a statement posted on the couple's website it was the last straw in a “ruthless campaign” by the broader tabloid press to make Meghan look bad.