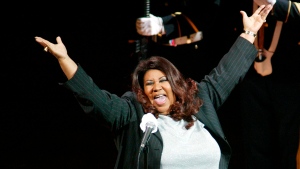 In this June 15, 2004 file photo, singer Aretha Franklin sings the national anthem before the start of game 5 of the NBA Finals between the Detroit Pistons and the Los Angeles Lakers in Auburn Hills, Mich. Michigan Gov. Gretchen Whitmer signed legislation Monday, July, 8, 2019, honoring the late Queen of Soul with a highway designation. (AP Photo/Al Goldis, File)

Gov. Gretchen Whitmer on Monday approved the bill to designate a portion of M-10 in Detroit as the "Aretha L. Franklin Memorial Highway." Franklin died in Detroit last year after battling pancreatic cancer.

The Democratic governor notes in a statement that Franklin's "creativity and voice contributed to our musical and cultural history in Michigan."

Supporters of the designation say dedicating a portion of the highway is a way to honour the musical and cultural icon, who grew up in Detroit and learned the gospel fundamentals at New Bethel Baptist Church.

Some Republicans who opposed the bill, however, have said such designations should only go to fallen first responders and military veterans.