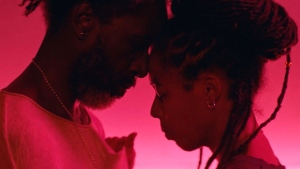 Actor and musical performer Saul Williams, left, and Donisha Prendergast are seen in an undated still image from the film Akilla's Escape. THE CANADIAN PRESS/HO-TIFF

Toronto-raised filmmaker Charles Officer remembers returning to his home city after playing professional hockey in England around age 18 and his mother being upset over his dreadlocks.

“The front cover of every newspaper was a Black boy criminalized with dreadlocks and my mother was freaking out,” Officer, now 44, recalled in an interview.

“She wanted me to cut my hair, because she was afraid for my life.”

That oppressive cycle of violence and trauma experienced by young Black boys for generations is the subject of Officer's new film, “Akilla's Escape,” which is making its premiere at the Toronto International Film Festival.

The crime noir is part of the 25th anniversary Planet Africa program, which was revived this year after a 15-year absence at the festival.

Poet-musician-actor Saul Williams stars as a partner in a Toronto cannabis grow-up who wants to end the operation. When a routine deal turns violent, he tries to help a teen who reminds him of himself as a boy caught up in Jamaica's politically fuelled gang culture, which followed him to New York and then Toronto.

Officer directed the film and co-wrote it with Wendy Motion Brathwaite, putting a fictional spin on the history of the Shower Posse, a Jamaican gang with political ties and a North American presence in cities including Toronto and New York.

“I think before I started making films, these sort of ideas and these questions were in my bones,” said Officer, whose most recent projects have been documentaries: “Mighty Jerome,” “Unarmed Verses” and “Invisible Essence: The Little Prince.”

“It was always this question that I was looking at - from what's happening with boys in Toronto, to growing up going to New York a lot as a kid, to going into Jamaica and having my family lineage there and just seeing this sort of connectedness.”

“Akilla's Escape” also mines from Greek tragedy as it profiles someone who was born into a situation in which he doesn't belong.

Akilla's operation is run by an enigmatic figure known as The Greek, while his name is both a play on Jamaican slang (with Akilla being pronounced as “a killa”) and on Achilles, the Greek warrior central to “The Iliad” set during the Trojan War.

Sun Tzu's ancient military treatise “The Art Of War” is referenced throughout the film and has had a big impact on Officer.

“I think when you do grow up quite racialized, you realize that you are in a kind of war and you have to find some sort of art to it,” he said.

“How we walk out in public - it's being aware that you have to be prepared that something may come for you. So how far do you take that, in that sort of strategic way of thinking, that you are not constantly in defence mode - that you can still remain vulnerable?”

Officer said it took the protests arising from the killing of George Floyd by police in Minneapolis in May for many people to realize the “violent acts that are just bestowed on Black men.”

Yet there's still a “social acceptance of violence towards Black boys,” he said, pointing to videos shared on social media depicting Black men being murdered.

He hopes his film will speak to issues “that prevent young individuals to flourish and to be excellent.”

“Some people start on third base. That's cool. I don't want to take away your starting at third base,” Officer said. “But we should be able to get up to the damn plate. We should have an opportunity to at least run to first base.

“That is what I'm fighting for, and the only way you can do that is if you're alive and breathing; it's not through death. So, I'm tired of seeing that image of violence. And to talk about that, you have to show it to some degree. And that's the accumulation of making this project.”

Officer penned his first draft of “Akilla's Escape” in a writing lab over a decade ago, after making his 2008 drama “Nurse.Fighter.Boy.” It took so long to bring it to fruition for a variety of reasons, including systemic ones.

“Fiction features, it's such a rare and a hard thing to do, especially in this country, when you're telling stories where it's from the Black experience,” Officer said. “People aren't knocking down our door and saying, 'Hey, here's $2 million to tell that story. I think it's great.'

“It's a lot of convincing. It's a lot of answering questions, which is normal, but I feel like there are a few more (questions) that happen when it's around projects like this.”

The Planet Africa program, which showcases films from Africa and the African diaspora, also includes: “40 Years a Prisoner” by Tommy Oliver, “Downstream to Kinshasa” by Dieudo Hamadi, and “The Way I See It” by Dawn Porter.

Officer said the revived program provides a much-needed platform to showcase films from the diaspora, and at a time of a racial reckoning calling for the amplification of BIPOC (Black, Indigenous, people of colour) voices.

“Not everyone was on board when Black Lives Matter dropped years ago, now there's a catching up happening,” Officer said. “So this program coming back, I hope that perhaps ... there is some sort of evolution of this that could actually remain a part of the programming.”

This report by The Canadian Press was first published Sept. 14, 2020.