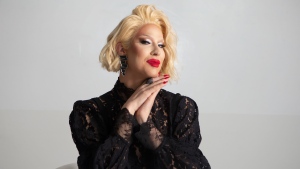 Brooke Lynn Hytes is photographed in Toronto as she promotes her new television show '1 Queen 5 Queers' on Thursday, November 25, 2021. THE CANADIAN PRESS/Chris Young

TORONTO - Canada's Queen of the North is ready to conquer new television territory.

Vivacious drag queen Brooke Lynn Hytes holds court as the sassy host of Crave's reboot “1 Queen 5 Queers,” but says her bigger mission is to share that throne with underrepresented voices.

Although the talk series is a revamp of “1 Girl 5 Gays,” which ended a six-season run on MTV Canada in 2014, Hytes is quick to point out key differences: this version features a drag queen moderator and a panel that includes members of the broader LGBTQ community.

“I wanted to do something that represented the queer community just because it has grown so much. Now we're seeing conversations about non-binary folks and trans folks and two-spirited folks and all these things that have always been there but never really been talked about.”

Like the groundbreaking original that inspired it, “1 Queen, 5 Queers” features candid conversations about sex, marriage, and non-traditional relationships.

The premiere includes open discussions about when to say “I love you,” polyamory, and even how much kissing is too much kissing.

“It has taken people a while to catch up and get with the program,” Hytes says during a recent interview in a black dress and heels.

“The last couple of years have really opened a lot of people's eyes. Unfortunately, a lot of the time you have to get louder and get in people's faces to get them to pay attention or they are just not going to.”

Indeed, taboo topics are front-and-centre on “1 Queen 5 Queers” and while the conversations are fun and flirty, they are also filled with valuable information.

Hytes wants the show to spotlight marginalized voices and says she's committed to fostering an open forum for diverse views.

“Representation is everything,” she insists.

“People seeing themselves or people who look like them on TV means so much. As a Caucasian male, I come from an enormous amount of privilege and that's something I am never going to understand. I feel like it is my job to move things forward so that people who are minorities get to see themselves. I think that's part of my job.”

The show has been a long time coming according to its host, who received international attention after finishing as the first runner-up on the 11th season of “RuPaul's Drag Race” in 2019.

From there, she served as a judge on Crave's “Canada's Drag Race,” and says despite growing fame, she's never lost sight of who she is.

“The biggest lesson I took away from 'RuPaul's Drag Race' was definitely to not take myself too seriously. Because I come from the ballet world, I am used to things being very serious. Drag is stupid and fun and irreverent and you have to allow yourself to look like an idiot sometimes.”

While “1 Queen 5 Queers” is light and fast-paced, the same cannot be said of the pandemic challenges that stalled development efforts in the early days, which Hytes traces back to January 2020.

“The pandemic caused everything to just go away for six months,” Hytes recalled.

“I honestly thought the show was dead in the water because we hadn't heard anything about it. We had to re-pitch it a little and get everyone excited again.”

The half-hour show is more than just a passion project for the performer, who also serves as executive producer. Hytes says she was “involved in every aspect,” including the casting, noting she personally screened “something like 200 audition videos.”

“I am a control freak,” she says with a smile, taking pride in having her fingerprints all over the project.

“When it comes to drag, a lot of people don't understand it and how it works and the lighting that is required. I have to teach people how to drag and what's necessary for it.”

As for her oft-used moniker as Canada's “Queen of the North” - a nickname that dates back to 2018 when Hytes was preparing to make a big entrance on “RuPaul's Drag Race” - Hytes says it's more than just a nod to her country and a “Game of Thrones” reference.

“I think I am one of the most well-known Canadian drag queens at this point,” says Hytes.

But ultimately it's just part of the act, she adds.

“I don't actually think I am the queen of the North. I kind of do but it's just tongue-in-cheek. It's just a way to introduce myself.”

- Murtz Jaffer is a freelance writer based in Toronto.