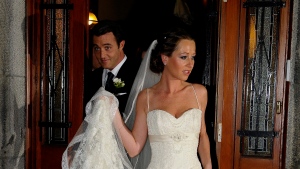 TORONTO - Celebrity stylist Jessica Mulroney is bringing her wedding expertise to CTV with a reality series in which couples create the ceremony of their dreams.

The Instagram influencer, best known for being friends with Meghan, the Duchess of Sussex, says “I Do, Redo” will help 10 couples who had disappointing first weddings renew their vows.

The 10-episode, 30-minute series is currently in production in Canada and the United States. It's set to air next year on CTV, where Mulroney's husband Ben is a fixture as co-anchor of the daily current affairs show “Your Morning” and the celebrity newsmagazine “Etalk.”

Although this is her first series, Jessica Mulroney has established herself as a go-to trend expert across the dial, including on CityTV's “Cityline” and “Breakfast Television,” and as a fashion contributor for ABC's “Good Morning America.”

Mulroney catapulted to global fame last year when she was among the guests at Prince Harry and Meghan's lavish nuptials, in which her twin sons served as pageboys and held the bride's veil.

Mulroney said Thursday in a release that her new show aims “to make a significant difference in the lives of our chosen couples whose first weddings did not go as planned due to tragic circumstances.”

“I Do, Redo” is set to premiere in 2020 on CTV, CTV Life Channel, and Crave in Canada, and on Netflix internationally.