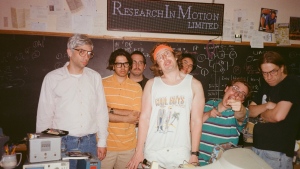 “BlackBerry," a movie from Toronto filmmaker Matt Johnson about the immense popularity and eventual combustion of the smartphone, will have its world premiere in Berlin next month. A still from the film is shown in this undated handout. THE CANADIAN PRESS/HO-Elevation Pictures

A Canadian film about the immense popularity and eventual combustion of the BlackBerry smartphone will have its world premiere in Berlin next month.

The latest project from Toronto-born filmmaker Matt Johnson is among the 18 films in the competition program at the Berlin International Film Festival.

Titled "BlackBerry," the film follows the rise and fall of Research In Motion, the Waterloo, Ont.-based company behind the phone.

Also among the Canadians screening projects at the fest is Korean-Canadian director Celine Song with "Past Lives," about two childhood friends who become disconnected when one family emigrates from South Korea.

This report by The Canadian Press was first published Jan. 23, 2023.