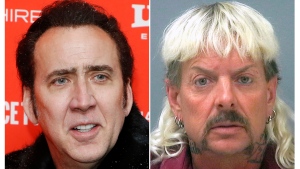 This combination photo shows actor Nicolas Cage at the premiere of "Mandy" during the 2018 Sundance Film Festival in Park City, Utah. on Jan. 19, 2018, left, and a booking mug of provided by the Santa Rosa County Jail in Milton, Fla., shows Joseph Maldonado-Passage, also known as "Joe Exotic." Cage will portray Maldonado-Passage in a new limited series produced by Brian Grazer. (AP Photo, left, and Santa Rosa County Jail via AP)

LOS ANGELES - The Joe Exotic phenomenon keeps growing, with Nicolas Cage to star in a TV miniseries about the colorful wild animal owner made famous by the “Tiger King” docuseries.

The TV series is the first for Cage, who has played a range of characters in movies including “Leaving Las Vegas,” for which he won an Oscar, “Moonstruck” and “National Treasure.”

It will explore how Joe Shreibvogel became Joe Exotic and detail his effort to keep his Oklahoma zoo open “even at the risk of losing his sanity,” the producers said in a statement Monday. It's based on the Texas Monthly magazine article “Joe Exotic: A Dark Journey Into the World of a Man Gone Wild” by Leif Reigstad.

Dan Laguna, who with producer Paul Young optioned the article, will write and executive produce the series, which will be seeking a distribution deal soon, producers said.

Netflix's “Tiger King” has made Joe Exotic an object of fascination and controversy. He is now known as Joseph Maldonado-Passage and is serving a federal prison sentence for his conviction in a murder-for-hire plot and for animal abuse.