Paul Gross returns to 'Tales of the City,' this time with Ellen Page 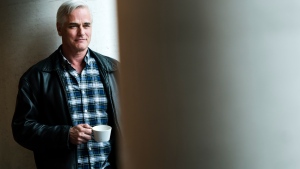 Actor Paul Gross poses for a photograph for the new film "Tales of the City" in Toronto on Tuesday, May 28, 2019. THE CANADIAN PRESS/Nathan Denette

TORONTO - The first time Paul Gross acted in a project with fellow Canadian Ellen Page was for the 2004 Nova Scotia-set film “Wilby Wonderful.”

Page was still establishing her career (her breakout, Oscar-nominated role in “Juno” came a few years later) and they didn't have any scenes together during production in Shelburne, but she left a huge impression on him.

“A friend of mine who was working on it called me and said, 'You should come down and just watch her. There's this kid on set who's good,”' the Calgary-born actor-filmmaker recalled in a recent interview.

Gross said he went to the set, stood at the back watching Page act out a scene and was astounded by her talent, thinking: “'Ooo, that's the real stuff.”'

The two didn't work together again until recently with the new Netflix series “Tales of the City,” which finds them digging into deep emotions in shared scenes playing father and daughter.

Premiering Friday, the drama is inspired by Armistead Maupin's novels and is an update to previous TV adaptations, about the LGBTQ culture of San Francisco and the residents of 28 Barbary Lane, an apartment complex run by an eccentric landlady played by Olympia Dukakis.

Dukakis, Gross and Laura Linney are among the original cast members from the 1993 miniseries who reprise their roles in the new version, which is billed as a limited series.

“I didn't remember everything about the show, so it was almost like watching it for the first time,” said Gross, “and it was horrifying to watch yourself 20-plus years ago thinking, 'You're terrible and your hair is worse.”'

In this incarnation, Linney's character returns to the city she left 20 years prior and is reunited with her ex-husband, played by Gross, and her gay daughter who doesn't know she's adopted, played by Halifax-born Page.

Gross's character was a lothario in the original. In this version, he's an overprotective single dad trying to find love on dating apps.

Returning to a beloved project so many years later with the same cast is a “once-in-a-lifetime” opportunity, said Gross, noting he didn't hesitate to sign on.

“It was one of the best things I'd ever worked on,” said Gross, who was replaced by another actor for subsequent versions of “Tales of the City” because he was busy starring in the Canadian TV series “Due South.”

“Doing it was one of the first times I ever worked on anything at any length where I felt part of something that everybody was a part of, including the crew. It's an experience that had a lot to do with shaping how I thought we ought to go about making stuff.”

The new “Tales” has an even more diverse and intergenerational slate of characters than the original, including a young transgender man, played by Josiah Victoria Garcia.

The writers for the series are all queer, said showrunner and executive producer Lauren Morelli.

“Telling some of those stories felt really exciting because we don't get to tell them a lot,” said Morelli, who worked closely with Maupin on this project and is known for writing on Netflix's “Orange Is the New Black.”

“I think everybody needs a Barbary Lane now. I certainly am really hungry for a place that feels safe and warm and like everybody's welcome, and a reminder of our inherent goodness and empathy as human beings.”

Other returning characters include Michael Tolliver, who is HIV-positive and dating a younger boyfriend. In this version he's played by Australian actor Murray Bartlett, who said he's long been a fan of the “Tales” franchise.

“It played a really important role in my life, as it did for a lot of us in the queer community, particularly when it first came out on TV,” said Bartlett.

“The show for me is celebrating family and community and the possibility of that, especially when you haven't found it potentially with your biological, to find what Armistead calls a 'logical family.'

“And at a time when there is so much division around us, I think it's a story worth telling, that we need to rediscover community globally and locally.”