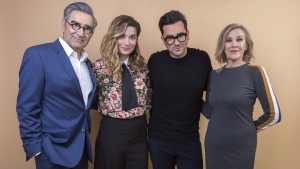 TORONTO - Canadian television producer Mark Montefiore says the historic Emmys sweep by “Schitt's Creek” has “blown the doors wide open” on the possibilities for the next generation of homegrown TV creators.

The “Letterkenny” executive producer watched last weekend as the beloved comedy scooped up one Emmy after another, ultimately pulling in nine trophies this year.

The tally was a record for the most wins in a single season for a comedy, and Montefiore said it sent a clear message to the global entertainment industry: Canada's hit shows can play in the big leagues.

“I don't think Canada can ever be second-guessed the way it might've been in the past,” he added, comparing the “Schitt's Creek” creators taking home armfuls of awards to other treasured Canadian achievements.

Sketch comedy shows “SCTV Network” and “Kids in the Hall” both left significant marks on pop culture in their heydays on U.S. television, for instance.

But Montefiore said in the age of streaming entertainment, the path a TV series takes to attract mass viewership is less linear. “Schitt's Creek” aired on CBC in Canada and Pop in the U.S., but it was a distribution deal on Netflix that helped build word-of-mouth.

Montefiore's show “Letterkenny” took a similar path, carving its own niche in the Canadian market through Crave before signing a deal stateside with Hulu, which exposed the series to a whole new audience, attracting fans that include Brad Pitt and Edward Norton.

“In the past, there was always a chance you could get something out of Canada that would be a success,” he said.

“But now those successes are coming more frequently, more aggressively and more impactfully.”

He said the culture of Los Angeles' entertainment industry is “extremely myopic,” so it takes a monumental event to really shakes things up. He believes the comedy show's awards victory will have a ripple effect through the business, with more agents likely to consider signing a Canadian comedy writer or director.

“Who's not going to listen to a pitch about a Canadian comedy now?” asked the producer, who's worked on “The Amazing Race Canada” and “Ready or Not.”

“They're going to take a much closer look now than they might have in previous years or even a few months ago... and there will be a heightened awareness that the next big hit could just as easily come from Canada.”

Seeing the cast of “Schitt's Creek” build their massive hit outside the traditional American system was inspiring to Tim Long, who grew up in Exeter, Ont., before moving to L.A. several decades ago to work on the “Late Show with David Letterman” and write for “The Simpsons.”

“When I started my career I felt like, 'everything's happening in America, so I guess I've got to go there,”' he said. “I'm glad I did that, but at the same time, it's completely different now.”

Long is currently developing “Cottage Country,” a comedy series about a divorced Toronto couple who head to Muskoka's great outdoors to sell off their final piece of their marriage - their dilapidated cottage that's been overtaken by local kids who are using it as their “beer shack.”

“It's very much in an embryonic stage,” he said of the concept, which is in development in with Toronto-based Elevation Pictures.

“If the show succeeds, and I think it will, we will definitely be standing on the shoulders of 'Schitt's Creek.”'