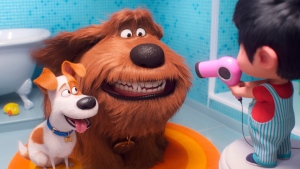 LOS ANGELES - After nearly 20 years, the current manifestation of X-Men movies is going out with a whimper.

Studios on Sunday estimate that “Dark Phoenix” earned a franchise low of $33 million from 3,721 North American locations over the weekend for a second place finish. “Dark Phoenix” is the first major 20th Century Fox film to be released by the Walt Disney Co.

Domestically the top spot went to Universal Pictures and Illumination's animated “The Secret Life of Pets 2” which grossed $47.11 million in ticket sales. Although enough for a No. 1 start, it's also less than half what the first film opened to in 2016.

“Aladdin” coasted to third with $24.5 million, “Godzilla: King of The Monsters” placed fourth with $15.5 million and “Rocketman” took fifth with $14 million.