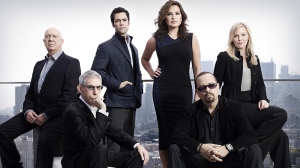 NEW YORK - That familiar “cha-CHUNG” sound effect from the opening credits of “Law & Order: Special Victims Unit” this Thursday will signal the debut of a new season and something else - TV history.

The show's 21st season launch makes it the longest running prime-time live-action series in U.S. TV history and will finally fulfil a goal that eluded show creator Dick Wolf nine years ago with another TV series.

His hope now? Twenty-five seasons, of course. “You keep pushing the goal posts back because you don't get dealt these hands very often, obviously,” Wolf says.

The Mariska Hargitay-led “SVU” now pulls out ahead of “Gunsmoke” and the original “Law & Order,” which are tied with 20. “Gunsmoke” still has more total number of episodes, while “The Simpsons,” an animated prime-time series, exceeds them both.