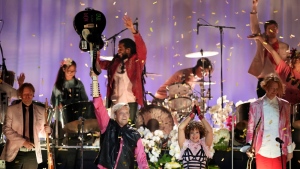 Arcade Fire perform during the Juno Awards in Toronto on Sunday, March 15, 2022. New albums from Arcade Fire, the Weeknd and Shad are among those longlisted for this year’s Polaris Music Prize. THE CANADIAN PRESS/Nathan Denette

New albums from Arcade Fire, the Weeknd and Shad are among those longlisted for this year's Polaris Music Prize.

The juried award for best Canadian album of the year was narrowed down to 40 contenders who will now vie for a spot on the short list, to be revealed July 14.

Previous Polaris winners Tanya Tagaq, Haviah Mighty and Backxwash each made the list with their latest projects.

The Polaris Music Prize awards $50,000 to the artist or group that created the best Canadian album of the previous year — irrespective of genre or sales — as chosen by a group of journalists, broadcasters and bloggers.

Last year, the prize went to hip hop artist Cadence Weapon for "Parallel World," his poetic reflection on race, policing and technology that was largely inspired by the George Floyd protests in 2020.

The long list was selected from 223 albums that made the first ballots.

The Polaris winner will be announced Sept. 19 at a gala presentation held at Toronto's Carlu, and webcast on CBC Music. The other short list nominees each receive $3,000.

This report by The Canadian Press was first published June 14, 2022.