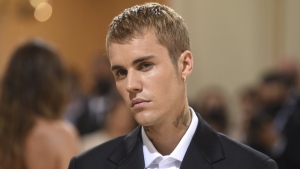 TORONTO - Justin Bieber is putting a hold on his Justice World Tour for the second time this year, blaming exhaustion.

The Canadian pop superstar announced on his Instagram account he would be taking a break from the road to focus on his health.

Bieber says after playing a show in Brazil on Sunday he felt exhausted and realized he needed to “rest and get better.”

He hasn't indicated whether the dates for his tour, which was slated to run into 2023, will be rescheduled.

In June, Bieber sidelined the North American leg of his tour, including two Toronto dates, to deal with the fallout of his Ramsay Hunt syndrome diagnosis, which left half of his face temporarily paralyzed.

The Stratford, Ont., singer returned the following month with a concert in Italy, but he says playing a total of six dates that culminated in Brazil's Rock in Rio performance over the weekend “took a real toll” on him.

“After getting off stage, the exhaustion overtook me and I realized that I need to make my health the priority right now,” the 28-year-old wrote in a message to fans.

“So I'm going to take a break from touring for the time being. I'm going to be OK, but I need time to rest and get better.”

This report by The Canadian Press was first published Sept. 6, 2022.