Kaya Usher, widow of Gord Downie, on 'healing journey' of her debut album 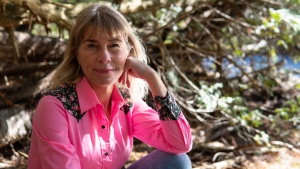 Kaya Usher smiles in this undated handout photo. More than four years after the death of her husband Gord Downie, Kaya Usher is stepping into the spotlight with the release of her debut album "All This Is." THE CANADIAN PRESS/HO, Richard Briant

TORONTO - More than four years after her husband Gord Downie's death, singer-songwriter Kaya Usher is in the midst of an artistic awakening.

With her debut album “All This Is” set for release Nov. 17 and its meditatively euphoric single “Heart Clicks” already available on streaming services, she's thinking about what's next with co-producer Kevin Drew of Broken Social Scene.

“Kevin and I plan on making a lot of music together,” she said, musing on potentially working with a symphony or dabbling in experimental electronic music.

“The possibilities are endless.”

Usher is bright and optimistic in a video conversation about the role music has played in her “healing journey” and how her album is about “coming into not only the grief but real strength” after a devastating loss.

Nearly a decade ago, the now 54-year-old faced breast cancer. Then, she witnessed Downie confront a terminal brain cancer diagnosis in 2015. The Tragically Hip frontman died in 2017 at age 53.

On “All This Is,” credited to Kaya Usher and the Family Band, the Toronto musician finds her deep interest in meditation crossing paths with devotion to her children.

Two of their four kids play on the album - 21-year-old son Lou on keyboards and drums and 26-year-old daughter Willo on vocal harmonies - realizing a shared goal she had with Downie of one day starting a family band.

Getting to this point took decades for the Toronto musician, who was born Laura Leigh Usher but now goes by Kaya.

Usher was a 20-year-old student at the University of Western Ontario in London, Ont. when she met a 23-year-old Downie, who was just getting started with the Hip, playing mostly university gigs.

“We were young and sweet and everything,” she recalled with a smile.

“But we would always sing and play together when we had people overâ€¦. We had our wedding celebration at the Horseshoe (Tavern) where Gord and I performed together.”

Early in their marriage, the Hip's popularity grew, and Downie began spending upwards of a year on the road, Usher said. But the couple wanted a “really big family” so they agreed Usher would focus mainly on raising their children while Downie toured.

“I always knew that my time would come, that I could sing my song for myself,” she said.

They bought a farm on the very tip of Prince Edward County, a quiet community in southern Ontario that Usher describes as “idyllic.”

“We pulled back and really wanted to give them an organic childhood. Gord was fiercely protective of the kids and I.”

Usher kept almost entirely out of the spotlight in those years. Only when Downie revealed that her breast cancer diagnosis inspired lyrics on the Hip's 2012 album “Now For Plan A” did she become a part of the conversation.

“He was so incredible for me when I got sick,” she said. “He had my back that whole time and gave me the space to get better.”

The couple separated before Downie was diagnosed with glioblastoma in late 2015. But given little time to live, they quickly shifted their priorities back to the family.

“Gord and I dropped everything and we came back home to each other,” Usher said.

Having her own experience with cancer, Usher said she knew the importance of supporting him.

“Near the end of his life, we got closer than we'd ever been,” she said. “And even though he'd lost so much, and we were losing so much, we developed a deeper connection than we'd ever had.”

Last February, Usher made a long-postponed trip to the Hip's Bathouse recording studio in Bath, Ont. to record her poem “Thunderclap” with the assistance of Drew and engineer Nyles Spencer.

It was the first time Usher and her family had returned to the secluded 19th century home since Downie died, she said.

Being there ignited old memories and buried emotions, and once “Thunderclap” was recorded the floodgates of creativity were opened.

“We did four songs in that first day and Kev said, 'I think we're doing an album,”' Usher recalled.

“I realized how much I've held in as a strong mom wanting to be there for my kids. And as I started singing, the tears just started flowingâ€¦. With each song, I never knew what I was going to do. It just came out of me.”

“Coming Home,” “First Frequency” and “Ascension” are a few of the songs that blend gentle chants, classical guitars and other stringed instruments with “high levels of frequency” meant to promote calm and relaxation.

“Heart Clicks,” the first single and poppiest song on the album, came together overnight as Usher grappled with writer's block. Partway through making the track, she was stuck on words. Telling the group she planned to sleep on it, Usher went up to Downie's former bedroom to rest.

That room was important to Downie, visitors to the Bathouse are often told. He considered it a space of inspiration and would bask in the rising sun as rays broke through a small east-facing window.

“I woke up early that morning and the sun was rising off the lake and coming in through the window,” Usher remembered.

“I jolted up, wrote down the words and said to Kev, 'I've got it.' I really feel like Gord wrote that song with me.”

Even though his voice doesn't appear, Downie's presence lingers throughout “All This Is.” Usher plays the harmonica he gave her on “Quickening” and his acoustic guitar appears on several other songs.

“I really tried to bring him in through his instruments,” she said. “We were as close to him as we could be.”

Having come this far, Usher can't predict what's next. She hopes to perform “All This Is” in a concert hall, ideally with Drew and her kids accompanying her onstage.

“We don't know where this is going,” she said, “But I feel like it's the start of something really special.”