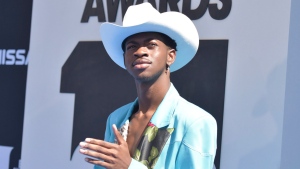 Lil Nas X arrives at the BET Awards on Sunday, June 23, 2019, at the Microsoft Theater in Los Angeles. (Photo by Richard Shotwell/Invision/AP)

NEW YORK - Lil Nas X is galloping his way to two new records on the Billboard charts thanks to the massive success of “Old Town Road.”

The song that beat out Mariah Carey and “Despacito” to become the longest-running No. 1 hit in the history of the Hot 100 chart has now set records on Billboard's Hot R&B/Hip-Hop songs and Hot rap songs charts, respectively.

“Old Town Road,” which is spending its 19th week at No. 1, surpasses the record set by Drake's “One Dance” on the Hot R&B/Hip-Hop songs chart. Drake's track spent 18 weeks at No. 1.