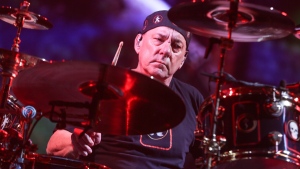 Neil Peart of Rush performs during the final show of the R40 Tour at The Forum on Saturday, Aug. 1, 2015, in Los Angeles. (Photo by Rich Fury/Invision/AP)

TORONTO - Neil Peart, the virtuoso percussionist and chief lyricist of Canadian progressive rock band Rush, was often called one of the greatest of drummers of all time, but despite the group's legions of superfans the musician led an intensely private life in an endless quest for deeper knowledge.

Peart, 67, died Tuesday in Santa Monica, Calif., after battling glioblastoma, an aggressive form of brain cancer, according to a statement provided by Elliot Mintz, a family spokesman.

“It is with broken hearts and the deepest sadness that we must share the terrible news,” his bandmates Geddy Lee and Alex Lifeson said in a joint statement on Friday.

“(Our) friend, soul brother and band mate of over 45 years, Neil, has lost his incredibly brave three-and-a-half year battle with brain cancer.”

While Peart is considered an inseparable piece of Rush's legendary rock status, he was often a reluctant participant in most public events, unless they were behind his elaborate - and often gargantuan - drum kits.

Peart also thrived with a pen in his hand, serving as the versatile main writer on such songs as the science-fiction infused “Tom Sawyer,” the potent social reflection “Subdivisions,” and power ballad “Closer to the Heart.”

Born in Hamilton, Peart grew up on a dairy farm near Hagersville, Ont., before his family moved to St. Catharines. He began drum lessons at age 13, inspired by the likes of jazz drummer Gene Krupa and The Who's Keith Moon.

Playing in several local rock acts as a teenager, he moved overseas to London after his 18th birthday in pursuit of stardom. Instead, he fell on hard times and returned to Canada to work at his father's farm equipment dealership.

It was a chance audition with unknown Toronto band Rush that piqued Peart's curiosity. At that point, Lee and Lifeson were six years into the band's history, and had already recorded their first album before original drummer John Rutsey decided to split.

Peart won over the pair, who brought him in to record 1975's “Fly By Night.” It was the start of him writing most of the lyrics for songs that helped sell millions of records around the world.

But their fame didn't come fast. It took several albums, including “A Farewell to Kings” (1977), “Hemispheres” (1978), and “Permanent Waves” (1980), which earned their first of seven Grammy nominations, before Rush started to solidify their reputation.

Several albums - “2112,” “Moving Pictures,” “All the World's a Stage” and “Exit ... Stage Left” - have sold more than one million copies each in the U.S. alone. They've received a career total of 10 Juno wins, including a Canadian Music Hall of Fame induction and a humanitarian award.

Kim Mitchell's band Max Webster was touring with Rush when their popularity started picking up steam. He said the trio were humble about their newfound success and Peart was as focused as ever before each show.

“It's such a physical day, he wouldn't expend much energy, he would just be very quiet, wouldn't talk a lot,” Mitchell remembered.

But once Max Webster took the stage, Peart would jump into action. As Mitchell's band performed, Rush's drummer would play along with them from backstage, as a way to warm up for his own set.

“He played with us almost every night,” Mitchell said.

Peart's backstage life was a mixture of fun times and deep focus.

Denise Donlon, a former MuchMusic VJ and producer, learned about Peart's fondness for reading when she interviewed him for a rock 'n' roll reading series. For years, she had been told Peart absolutely hated interviews, and while that was mostly true, picking a topic he loved pulled him into a conversation.

“I literally asked him one question and it was as banal as: 'Read any good books lately?”' she said.

“He had photographic memory, remembered titles, and authors and linked it all. And literally I just sat there with my mouth open.”

Peart's political and philosophical views inspired him to interview federal Liberal leader Jean Chretien in 1993 for MuchMusic's “Vote With a Vengeance” coverage.

“For a guy who hated interviews, going up against a campaign-hardened politician surrounded by fans banging on the window on national television, it was incredible,” Donlon said.

“(He) never let Chretien off the hook - not on AIDS, on helicopters, on handguns, on the GST, on anything. He researched deeply and took the role... very seriously.”

In 1997, Peart and his bandmates became the first rock musicians to be inducted into the Order of Canada.

That same year, Peart lost his 19-year-old daughter Selena Taylor in a car accident. In 1998, his wife, Jackie Taylor, died of cancer.

Those tragedies upended his life. Many thought Peart would leave his music career behind, Donlon said.

“But happily he came back, and I think it was the brotherhood of he, Alex and Ged that were a sanctuary for him,” she said.

“He could lose himself in the music and he could heal at the same time because the band sustained him.”

In 2013, the band finally made it into the Rock and Roll Hall of Fame, which many fans felt was long overdue.

Peart was known for using motorcycle trips as a form of meditation. He embarked on several notable ones throughout his life, particularly when he was contemplating life's pivotal moments. One of them took him across the United States in 2004, the same year Rush marked its 30th anniversary.

Rush embarked on a 40th anniversary tour in mid-2015 that wound up being their last. At the time Peart attributed it at least partly to chronic tendonitis and shoulder problems. Lee has since acknowledged that it might have come as a surprise even to the band themselves.

“I don't think in our heart of hearts we believed it was the end - even though it did turn out to be the end,” Lee said in a 2018 interview with The Canadian Press.

“Maybe we would've served our fans better if we had just accepted the reality that yeah, this is going to be our last tour, and tell everybody. But they sort of had that sense and they came out because of it anyway.”

Peart is survived by his wife, their daughter, Olivia Louise Peart, as well as his parents, Glen and Betty, and three siblings, Judy, Nancy and Danny.

“Those wishing to express their condolences can choose a cancer research group or charity of their choice and make a donation in Neil Peart's name,” the band added in their statement.

This report by The Canadian Press was first published Jan. 10, 2020.

Reaction to the death of Neil Peart