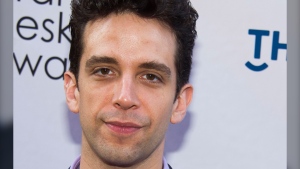 Broadway Records says it will release “Nick Cordero: Live Your Life” on Sept. 17 - what would have been his 42nd birthday.

Corder, who grew up in Hamilton, died earlier this month after spending three months in a Los Angeles hospital with complications from COVID-19.

His upcoming posthumous album is named after one of his songs and captures his cabaret performance in April 2019 at the Broadway supper club Feinstein's/54 Below.

Cordero was in many stage productions, including “Bullets Over Broadway” in New York, which earned him a Tony Award nomination.

His wife, dancer and personal trainer Amanda Kloots, says she'd never seen Cordero work so hard on something as his cabaret show, and he was nervous to perform it.

“He created this show from scratch, choosing songs to tell a story... his story.”

Broadway Records says Cordero and Emmy Award-winning producer Michael J. Moritz Jr. had planned to release the recording of his cabaret act but didn't get a chance to.

The label says the album will now be released with his family's blessing to honour his legacy.

Proceeds will go to benefit Kloots and their one-year-old son Elvis.

This report by The Canadian Press was first published July 22, 2020