Oprah's Toronto appearance gets cancelled due to NBA Finals 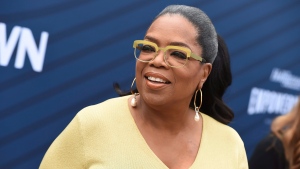 Oprah Winfrey arrives at THR's Empowerment in Entertainment Gala at Milk Studios on Tuesday, April 30, 2019, in Los Angeles. Oprah Winfrey is stepping aside to make way for the Toronto Raptors. THE CANADIAN PRESS/AP, Jordan Strauss/Invision

TORONTO - Oprah Winfrey is stepping aside to make way for the Toronto Raptors.

The famed TV host's plans to bring her “Your Path Made Clear” speaking engagement to the Scotiabank Arena on Friday have been cancelled, announced promoter Live Nation.

The decision comes as the NBA Finals push ahead to Game 6 in Oakland, Calif., on Thursday.

If the Raptors lose, the team would return to their home city for Game 7 on Sunday night.

That makes organizing a different event in the Toronto arena more difficult because the basketball court would likely have to be disassembled to accommodate Oprah's stage and seating arrangements.

Live Nation said the cancellation is “due to the ongoing NBA Finals schedule and continuing requirements for Scotiabank Arena by the NBA.”

Tickets will be refunded at the point of purchase.

The whirlwind success of the Raptors this season has led to a number of schedule changes at the Toronto arena.

Among them, British band the Who bumped their planned June concert to September in anticipation of the NBA Finals, while country singer Carrie Underwood moved her show to October.