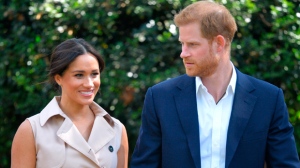 In this Wednesday Oct. 2, 2019 file photo, Britain's Harry and Meghan, Duchess of Sussex arrive at the Creative Industries and Business Reception at the British High Commissioner's residence, in Johannesburg, where they will meet with representatives of the British and South African business communities, including local youth entrepreneurs. British media reports said Friday Oct. 4, 2019 that Britian's Prince Harry has launched legal proceedings at the High Court against two British tabloid newspapers over alleged phone hacking. (Dominic Lipinski/Pool via AP, File)

Buckingham Palace confirmed in a statement on Saturday that claims regarding “illegal interception of voicemail messages” were filed on Harry's behalf.

The palace declined to say more or provide details “given the particulars of the claims are not yet public.”

The cases escalate Harry's fight with the British tabloids. His wife, Meghan, the Duchess of Sussex, sued the Mail on Sunday for alleged copyright infringement and other civil violations after the paper published a letter she wrote to her father.