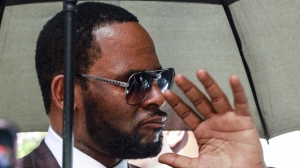 CHICAGO -- Federal prosecutors say R. Kelly has had a cellmate for some time, refuting a claim by the singer's attorneys in which they are seeking Kelly's release from what they described as "cruel and unusual punishment" in solitary confinement.

In a Friday court filing, prosecutors say Kelly has had a cellmate for some time at the Metropolitan Correctional Center in Chicago where he's being held on sexual misconduct and other charges. They also say Kelly "has had more than one cellmate so far" and even refused an order last month to take a cellmate.

The Chicago Sun-Times reports that prosecutors contend that the 52-year-old Kelly is seeking special treatment because he's a celebrity.

A judge is scheduled to consider Kelly's attorneys' motion next week.