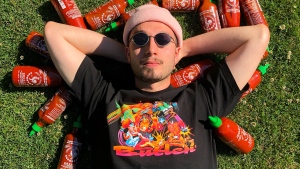 Canadian rapper bbno$ (pronounced "baby no money") poses in an undated handout photo. The rapper can tell you exactly how 15 seconds on TikTok turns somebody into a social media superstar. THE CANADIAN PRESS/HO, Antonio Chavez

TORONTO -- Canadian rapper bbno$ (pronounced “baby no money”) can tell you exactly how 15 seconds on TikTok turns somebody into a social media superstar.

It happened to the 24-year-old artist last year when countless teenagers jumped onto the social media platform to post dance and comedy videos set to the beat of his infectious track “Lalala,” with American producer Y2K.

The TikTok clips sparked a sensation of sorts, helping the song rack up half a billion streams on Spotify, and its goofy music video garner over 250 million views on YouTube.

“I never really expected to get this far, to be honest, so it's kind of cool,” the rapper said in a phone interview while barrelling down a highway in New Mexico headed to his next live show.

The rapper, born Alexander Gumuchian, can mark another accomplishment this month. He's nominated for two categories - breakthrough artist and fan choice - at this month's Juno Awards.

While he won't be able to attend the Junos because he's on tour, the experience seems surreal to the Vancouver-raised artist, who describes himself as basically stumbling into the world of rap after dreams of becoming a competitive swimmer were sidelined by a serious back injury in Grade 12.

As he picked up the pieces of his life, he also took an interest in rhyming off beats, which grew into uploading his songs to Soundcloud, a popular outlet for music lovers. After amassing a considerable online fan base, he released the collaboration “Lalala.”

Gumuchian checked in with The Canadian Press to reflect on how his music career exploded in China several years ago, and how TikTok users helped send “Lalala” to No. 55 on the Billboard Hot 100.

CP: Looking back on your original goals of being a competitive swimmer, can you talk about how that back injury changed your life?

Gumuchian: It was devastating, to say the least. Even to this day I watch how I walk, how I perform because my back is very tender. My lifestyle is a little bit different. I have a hard time sleeping because I'm never really comfortable. I'm in chronic pain all the time, but I've also learned how to deal with it. I guess in that sense it was a positive... because I made a change in my life. After I broke my back the doctor was like, “You could've easily been paraplegic,” so I was like I have one life, I've got to make something worth of it.

CP: Even before “Lalala” blew up you'd built a fanbase on Soundcloud. Your first taste of serious fame came when a Chinese dance crew called TFBoys used your song “Yoyo Tokyo” in one of their viral videos. But how did you find out about them?

Gumuchian: I was chilling at home on reading week in February 2017 when I got a message from some lady in China and she's just like, 'Yo, you're very famous in China.' And then I did a ton of research and figured it out.

CP: Wait, so someone messages you saying you're huge in China and that's it? What are you thinking? It sounds like a prank.

Gumuchian: I was thinking it was a prank. So I went on her page and she only followed me and had zero followers, so I'm thinking either this is a bot or someone's (messing) with me. I started doing research and I had like 8,000 comments on (Soundcloud for one of my songs). Nobody was getting 8,000 comments at that time. I started doing more research. I got on WeChat and Weibo, (two popular social media apps in China). Their choreographer who did the dance to my song literally changed my life. I need to thank that guy because I got popped off to say the least. I went out there twice in one year because I was making so much more money than I could've anywhere else doing shows.

CP: What was it like touring China like when you're an English artist still pretty new to the road?

Gumuchian: It was inspirational. It's funny because I learned Mandarin when I was younger. It didn't really stick that well, but my mom, when I was homeschooled she was like “You can learn French or Mandarin.” So I know how to speak a little bit, but it's not like I understand much.

CP: A few years later, you released “Lalala,” which has put you on the radar of the mainstream. It's crazy how that happens, and a creative moment that strikes at the right time can determine the next several years of your life. I guess you've learned that a few times now.

Gumuchian: I didn't expect the song to be this big, bottom line, but it's cool. I think I've genuinely made better music. The song is a banger and it's undeniably catchy though. Even Y2K and I are like, “Yeah we've definitely made better music.” I really like “Shining on my Ex,” I think that song is a perfect structure in regards to my goofiness, and I also like “Bad Thoughts,” which is probably the most serious sounding song I've ever made. But I also like my song “Sriracha” with Lentra where it's just a house beat, super uplifting, fun and goofy as hell.

CP: How did you harness the power of TikTok? Are there any lessons you gleaned from that strategy?

Gumuchian: Everyone is jumping on the TikTok train because of “Lalala,” “Old Town Road,” all these other songs that are blowing up. But bottom line... “Lalala” is just a catchy song, and that's what should be coming first. If you make catchy enough music then it might take off anywhere. If your song is going to go viral, it's going to go viral naturally. You can't force it.

This interview has been edited and condensed for clarity.