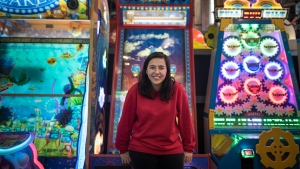 Elle Mills poses for a photograph at the Rec Room in Toronto on Friday, October 4, 2019. THE CANADIAN PRESS/ Tijana Martin

Little more than year ago, the 21-year-old Ottawa social media star was pouring her everything onto the video platform. She pranked her dad's ex-wife, shared her first kiss with millions of viewers, and came out as bisexual only days after she'd figured it out herself.

And then a crippling burnout knocked Mills down, right in front of her own cameras, forcing her to reevaluate her priorities.

“I feel like sometimes I don't leave enough for myself - I'm almost too open,” Mills said Friday after speaking at Buffer Festival, a Toronto digital video conference and film showcase.

“There's boundaries, that's what I've learned recently. You don't need to share everything.”

Except Mills wants to share many things. It's what helped her amass nearly 2 million YouTube subscribers who eagerly await her next comedy production. The slickly produced videos typically involve Mills bringing to life some outlandish idea she's dreamed up on paper.

Over the summer, she recreated high school prom so her classmates and teachers could watch as she crowned herself prom queen. Two years ago, she legally married her sister's boyfriend as a joke - a prank she now admits is her only regret.

As one YouTube fan pointed out, Mills makes videos with “clickbait” titles that actually deliver the goods. In return, she gets the views, which often number in the millions.

Her most popular video, called “Coming Out (Elle Mills Style),” was made on an impulse in November 2017 as she grappled with her own identity. It was presented in the spirit of a teen rom-com, complete with tear-jerking moments of authenticity as Mills confided her biggest fears of telling her family and friends she was bisexual.

The video was an instant viral success, pulling in more than 5 million views to date and reshaping Mills' life and YouTube identity. She became a global celebrity in the YouTube community and, in some young viewers' eyes, even an LGBTQ figurehead. But it also handed Mills responsibilities she didn't anticipate.

Within months, Mills was doing a cover shoot for Diva, a European magazine for lesbian and bisexual women.

“I'm like, 'Oh my god, am I now a representative for bisexuals? What's happening?' Mills said. ”No one is ever qualified, but I feel like some people are really unqualified, you know what I mean? I feel like I definitely need to have more experience - I've never dated anybody.“

An accidental spokesperson, Mills realizes her young fans now expect her to speak out about certain causes. She's uncomfortable with some of those pressures, and says she prefers to speak only about what she knows, whether it's on the topics of sexual orientation or mental health.

Growing up, Mills dreamed of the limelight, taking a cue from her sister's own aspirations of being a pop star. They'd shoot music videos together, which led Mills to adopt her own solo music ambitions. Knowing she couldn't carry a tune, she picked up a guitar and took roles in school plays.

Eventually her performative thirst led to YouTube, where she taught herself how to edit videos. After high school graduation, she fully committed herself to the goal of becoming an online celebrity. The work paid off - in a year she generated more than a million subscribers.

But with the popularity came an increasing expectation Mills thrust upon herself. She was making a new video each week, trying to raise the stakes with each upload. Early last year she began crumbling under the pressure as more fan conventions booked her and she lauched a tour of public appearances.

A few months later, she posted “Burnt Out at 19,” a video that directly addressed pressures she was feeling off camera. In its most heartbreaking moment, audio of Mills having a panic attack plays over a shot of her bedroom - a vacant laptop sitting on the sheets. The footage became a centrepiece in the larger social conversation about how feeding YouTube's bottomless content pit was driving its creators into depression.

After her breakdown, Mills made some changes. She scaled back her weekly YouTube output to making videos only when she felt inspired. Over the past year she's gone to therapy and leaned on her closest friends for emotional support.

Most importantly, she reminds herself that YouTube isn't life or death, though she admits staying in that mindset isn't always easy.

“If a video does badly, I literally feel like my YouTube career is over and I peaked,” she said. “And then it goes down the hill, and I'm like I can't post again, I freak out and start hyperventilating. Then I realize the fact this is affecting me so badly - a YouTube video - that's so not good.”

Mills doesn't plan to sign off the platform, but she is focused on other projects. YouTube exposed her to a world of new options, including “Kids Plan!” a series for Facebook where she helps kids plan romantic dates for their parents, and an upcoming digital series for Nickelodeon.

Eventually she'd love to direct a movie in the vein of her favourite filmmaker John Hughes.

“I really just want to bring back that feeling of a good teen movie - I feel like we're lacking that right now,” she said.

Perhaps next year, she'll begin exploring the possibility of moving out of her parents' house too - buying a home in Ottawa to mark her growing independence.

“I feel like I'm the type of person that needs to learn from their mistakes. I need to experience it, and then be like: 'This is why I can do that.”'