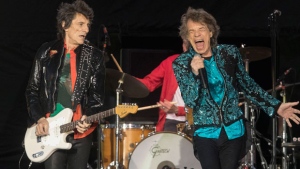 The Rolling Stones perform during the "No Filter" tour in Oro-Medonte, Ont., on Saturday, June 29, 2019. THE CANADIAN PRESS/Fred Thornhill

TORONTO -- It's taken nearly half a century but the Rolling Stones are finally giving their fans some satisfaction with an official release of their famed shows at the El Mocambo.

The legendary rock act says it's completed a new mix of recordings captured at two secret Stones concerts that unfolded at the Toronto club on March 4 and 5, 1977.

"Live at the El Mocambo" will be released on May 13, ending a period of 45 years when the recordings were only available through bootleg copies.

The album will feature their full set from March 5 as well as three bonus tracks from the night before, all mixed by Bob Clearmountain, who's worked with the Stones many times over the years.

Two live songs -- "It's Only Rock 'n' Roll" and "Rip This Joint" -- have been released on digital platforms as a teaser.

Only four performances from the venue, affectionately known as the El Mo, appeared on the Stones' 1977 live album "Love You Live."

In its announcement, Universal Music Canada recalled the story behind the two secret shows at the Spadina Avenue club.

After it was picked as a suitable venue, a radio contest was organized to win tickets for what was billed as an April Wine show, supported by an unknown band named the Cockroaches.

Turns out Halifax's April Wine was the opening act and the other band was one of the biggest rock bands in history.

By the time the first evening was underway, the secret was out and the Stones' small club gig was part of music history.

The El Mocambo reopened last fall after an extensive renovation that brought its aging structure into the modern era. Its original palm tree neon signs, which once lit up the venue's exterior, are now part of the indoor decor.

"Live at the El Mocambo" will be released digitally, on a double compact disc and in two LP versions spread over four vinyl records.

This report by The Canadian Press was first published March 25, 2022.

The Rolling Stones perform during the "No Filter" tour in Oro-Medonte, Ont., on Saturday, June 29, 2019. THE CANADIAN PRESS/Fred Thornhill