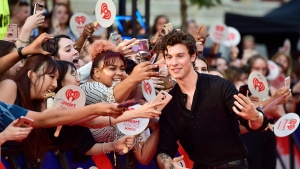 Nothing was holding Shawn Mendes back from making history at this year's SOCAN Awards.

TORONTO - Nothing was holding Shawn Mendes back from making history at this year's SOCAN Awards.

Organizers say that makes the singer-songwriter the most-awarded creator in a single year at the SOCAN Awards, which launched in 1990.

Mendes picked up the international song award as well as two pop music prizes for his hits “Senorita” and “If I Can't Have You.”

He rounded out his wins with a songwriter of the year nod in the performer category, as well as the International Achievement Award.

Other winners this year included Toronto-raised Frank Dukes, who nabbed a songwriter of the year award for pr