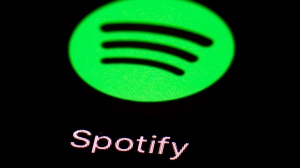 (CNN) -- Spotify is not joking around amid a dispute over royalties for comedy content. The streaming giant has removed the work of hundreds of comedians from its platform -- including Tiffany Haddish, Kevin Hart and the late Robin Williams -- according to rights agency Spoken Giants.

Spoken Giants, which represents some of the affected comedians, describes itself as "the first global rights administration company for the owners and creators of spoken word copyrights," and aims to get streaming platforms to pay comedians for writing jokes in the same way songwriters are paid.

The group told CNN that the take-down happened on November 24, and said that it never requested the content's removal.

"With this take-down, individual comedians are now being penalized for collectively requesting the same compensation songwriters receive," he added. "After Spotify removed our members' work, we reached out but have not received a response. We have now requested an immediate meeting to resolve this situation."

A Spotify spokesperson told CNN that the streaming platform had already paid "significant amounts of money" to offer the comedy content to listeners, and "would love to continue to do so."

"However, given that Spoken Giants is disputing what rights various licensors have, it's imperative that the labels that distribute this content, Spotify and Spoken Giants come together to resolve this issue to ensure this content remains available to fans around the globe," the spokesperson said.

Although the content is still available on other platforms including Pandora and Sirius, Spoken Giants said comedians with lower profiles and revenues could suffer from losing Spotify as a platform.

On social media, New York-based comedian Joe Zimmerman called the move "corporate bullying." Another New York-based comedian, Liz Miele, tweeted that her albums had also been removed from the platform because comedians "had the audacity to ask for money owed to us," and jokingly compared herself to singer Taylor Swift.

Swift was previously engaged in a dispute with Spotify, arguing artists were not paid enough. The singer pulled her entire catalog from the platform in 2014, but reversed her decision in 2017.