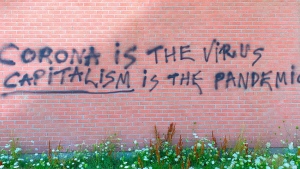 A scene from "The New Corporation: The Unfortunately Necessary Sequel," is shown in a handout. Premiering Sunday at TIFF, the up-to-the-minute documentary by Joel Bakan and Jennifer Abbott is the follow-up to 2003's "The Corporation" and looks at how companies' attempts to rebrand themselves as socially responsible actually "threatens democratic freedoms." THE CANADIAN PRESS/HO-TIFF

TORONTO -- For many filmmakers, COVID-19 has derailed their projects. But for the Canadian co-directors of "The New Corporation: The Unfortunately Necessary Sequel," it actually added to their themes, and the two worked feverishly to incorporate the pandemic in time for the Toronto International Film Festival.

Premiering Sunday at TIFF, the up-to-the-minute documentary by Joel Bakan and Jennifer Abbott is the followup to 2003's "The Corporation" and looks at how companies' attempts to rebrand themselves as socially responsible actually "threatens democratic freedoms."

The film touches on everything from social services to climate change and inequality, so when the pandemic struck, it related to the entire narrative. As such, the film has in-person interviews filmed pre-pandemic, and video conference chats with experts shot after the novel coronavirus hit.

COVID-19 has also revealed that "the ideology that corporations have been promoting over the last 40 years -- of a diminished social state, of privatization, of deregulation, of slashing taxes, of slashing spending -- doesn't work," said Bakan.

Compared to other countries, Canada has dealt with COVID relatively successfully, said Bakan. By contrast, it's been dealt with "very unsuccessfully" in the U.S., where "the entire public infrastructure of health, of social services, of social provision, of social equality has been decimated by 40 years of corporate attacks on the social state."

Another current event the filmmakers incorporated: The anti-Black racism protests and social justice movement arising from the killing of George Floyd by police in Minneapolis in May.

The racial reckoning is an example of how individuals can be agents of change by coming together in a time of extreme despair and systemic problems like racialized capitalism, said Abbott.

"I don't think we can underestimate how critical this moment in time is," she said, "and how critical it is that we take actions and resist the trajectory we're on."

Where the first film looked at corporate power and the economization of every aspect of life, the sequel examines how, since the 2008 economic collapse, corporations have been claiming to be socially responsible while playing down their attempts to turn a profit.

The election U.S. President Donald Trump put the development of the new film "into warp speed," said the filmmakers.

"Now we had a president who was kind of indistinguishable, and presented himself as indistinguishable, from a corporate CEO, and who was celebrating the fact that he would run the country as a corporate CEO would; and who, in all kinds of really problematic ways, remained tied to his business interests in ways that no president in history had," said Vancouver-based Bakan, who also wrote a book to accompany the new film.

The Crave-bound film touches on other issues including links between corporations and government, and the privatization of everything from water to classrooms and novel coronavirus testing.