The Weeknd concert halted mid-performance as he loses his voice 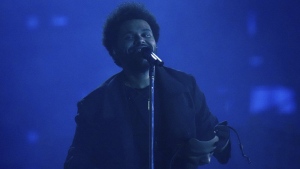 FILE - The Weeknd performs in Vancouver, British Columbia on Aug. 23, 2022. The Weeknd suddenly ended his sold-out concert in Southern California after losing his voice during a mid-song performance. The four-time Grammy winner was performing his third song “Can’t Feel My Face” before he abruptly stopped his show Saturday, Sept. 3, 2022 at SoFi Stadium in Inglewood, Calif. (Darryl Dyck/The Canadian Press via AP)

Canadian recording artist The Weeknd abruptly ended his show at the SoFi stadium in Los Angeles after losing his voice midway through a song.

The musician's voice gave out during the first song at the sold-out Saturday night concert in Inglewood, California.

He apologized to the audience for not being able to give them the concert he wanted to and told them they would be refunded for their tickets.

The singer tweeted following the concert that his heart dropped when his voice “went out” during the first song.

He repeated his apology to fans in the post and said he will make it up to them with a new concert date.

The four-time Grammy winner was born in Toronto and grew up in the east-end borough known locally as Scarborough.

“I wanted to come out and personally apologize,” the Weeknd said in a video posted on Twitter. “I'm so sorry, and I love you guys so much. You know how much this kills me.”

This report by The Canadian Press was first published Sept. 4, 2022.