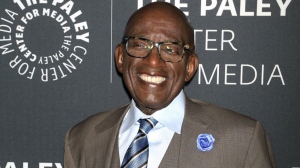 FILE - Al Roker attends NBC's "Today" show 70th anniversary celebration at The Paley Center for Media on May 11, 2022, in New York. On Friday, Nov. 18, Roker said he's recovering after being hospitalized the week before for blood clots. (Photo by Greg Allen/Invision/AP, File)

“So many of you have been thoughtfully asking where I've been. Last week I was admitted to the hospital with a blood clot in my leg which sent some clots into my lungs,” Roker, 68, announced on Instagram.

“After some medical whack-a-mole, I am so fortunate to be getting terrific medical care and on the way to recovery,” he wrote. “Thanks for all the well wishes and prayers and hope to see you soon. Have a great weekend, everyone.”

His co-anchors wished him well online and on the show.

“Al Roker-- hurry back to us... counting the days xoxoxo,” Hoda Kotb said in a comment on Roker's post.

“He's in good spirits, we've all talked to him,” Savannah Guthrie said on Friday's show.

Roker's wife, ABC News correspondent Deborah Roberts, posted that she was grateful for “the top notch medical care and prayer warriors from every corner.”

“We love you dearly sweet Al and can't wait to get you home,” Roberts wrote, adding heart emojis.

It wasn't immediately announced whether Roker would be able to co-host NBC's coverage of the Macy's Thanksgiving Day Parade, which he has done since 1995.

Roker also was off the air in 2020 for two weeks after he underwent successful surgery for prostate cancer.

Roker said he went public with his diagnosis to highlight the risk of prostate cancer, especially among Black men.