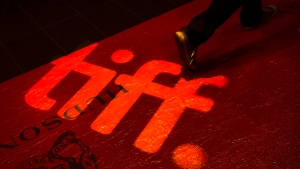 A man walks on a red carpet displaying a sign for the Toronto International Film Festival at the TIFF Bell Lightbox in Toronto on Wednesday, September 3, 2014. THE CANADIAN PRESS/Darren Calabrese

TORONTO -- Broadway percussionist Jacqueline Acevedo says hunkering down for 14 days of self-isolation was worth it -- it's allowed her to appear at the world premiere of "David Byrne's American Utopia."

The Spike Lee-directed concert film opens this year's pandemic edition of the Toronto International Film Festival on Thursday night at a waterfront drive-in theatre. For the Toronto-raised Acevedo, who stars in the film, this homecoming is one for the history books.

"It's a full circle moment," she said a few hours after her quarantine lifted on the eve of the festival.

"I knew that as a Canadian, because of my history, and how much this place has given me, it's like -- I have to come back," said Acevedo, who lives in New York. "I can't not... I'm in a Spike Lee joint with all my buddies up there, with David Byrne."

Acevedo will help kick off an unusual opening night as organizers adhere to public-health protocols to reduce the spread of COVID-19.

The socially potent "American Utopia" will screen almost simultaneously at three outdoor theatres across downtown Toronto. Two of those screens will be drive-in locations, while the other is an open-air cinema with a physically distanced audience.

Drive-in events aren't often a cinephile's first venue choice, but in the midst of the pandemic TIFF organizers had to make creative compromises.

Only about 60 features screen over the next week and a half, instead of the usual selection of several hundred films. Many of the titles will be accessible across the country on a virtual platform hosted by the festival.

"American Utopia," which rolls out on HBO Canada in October, plays for a limited time on TIFF's online Bell Digital Cinema next Wednesday.

The feature-length concert is a fitting start to a year where TIFF programmers have focused on films that address potent social conversations about race, immigration and politics.

All three take centre stage in Byrne's show, which puts him alongside 11 international musicians as they perform songs from his 2018 album of the same name, and other favourites pulled from his years as the frontman of Talking Heads.

Acevedo appears throughout the show playing the drums, dancing and taking a knee for Black lives before a powerful rendition of Janelle Monae's protest song against police brutality, "Hell You Talmbout."

The moment is captured with a few trademark stylistic touches from the film's acclaimed director, who's dedicated much of his career to portraying how racism rips through society.

"People keep saying it's such a timely show," Acevedo said.

"But it's also in a strange way, I wouldn't say prophetic, but it was definitely ahead of its time. Now it's like things are making a lot more sense and catching up."

"American Utopia" was filmed over three days in February, a few weeks before the pandemic shut down Broadway.

Landing a part in the production was like serendipity, as Acevedo describes it, in part because a friend recommended she audition for a role knowing her eclectic skills.

Acevedo's father, a Colombian composer, moved with her to New York as a teenager, which exposed her to a vibrant world of global music, dance and theatre. She picked up the congas with his encouragement, and began playing more live shows, which eventually led to her winning a Latin Grammy Award as part of all-female mariachi band Flor De Toloache.

"American Utopia" called for a performer with knowledge of drums, movement and performance.

"I just felt like it was made for me," she said. "I got to use all my talents and training in a way that I never really could have imagined."

With the Broadway show on hold due to the pandemic, and the earliest possible restart date pegged in January 2021, Acevedo is hopeful the filmed version gives audiences a thought-provoking experience suited for this difficult year.

"It's really exciting to be part of something like that."

This article by The Canadian Press was first published Sept. 10, 2020.