Women vying for Oscars salute their progress, snubs aside 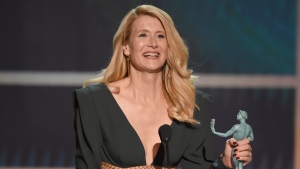 Laura Dern accepts the award for outstanding performance by a female actor in a supporting role for "Marriage Story" at the 26th annual Screen Actors Guild Awards at the Shrine Auditorium & Expo Hall on Sunday, Jan. 19, 2020, in Los Angeles. (Photo/Chris Pizzello)

BEVERLY HILLS, Calif. - The mood at Diane von Furstenberg's lunch honouring this year's female Oscar contenders could have been downbeat, given the shutout of women directors for Sunday's awards. Instead, it was celebratory and defiant.

The 30-plus nominees who gathered at von Furstenberg's home, tucked into elegant and secluded grounds, cheered as the women spoke in turn. Laura Dern, a best supporting actress nominee for “Marriage Story,” kicked things off Wednesday by recalling von Furstenberg's first nominees' lunch six years ago.

A single couch was enough to hold the handful of women, Dern told the packed room, adding, “I look forward to that entire garden to be filled in a few years!”

Von Furstenberg and Academy of Motion Picture Arts and Sciences CEO Dawn Hudson said a record 67 nominations went to women this year, which Hudson called representative of a trend in the academy that has long tilted heavily male. Half the newly invited members are women, she said, and the leadership is changing as well.

“When I started with the academy nine years ago there were six female governors, and it was hard for our voices to be heard around the big table,” Hudson said. “And today there are 25.”

Greta Gerwig, excluded from the best director category for “Little Women” despite its best-picture bid, was on hand briefly before dashing out, it was explained, to get back home to her baby.

“That's OK. As long as she gets the Oscar,” a guest called out. Gerwig is a nominee for best adapted screenplay.

“On behalf of Greta and myself, yeah, it would have been better if she got nominated. But `Little Women' is the third movie in the history of the Oscars that is produced, directed and written” by women, Pascal said, drawing applause.

That's good, she said, “but more is better.”

Krysty Wilson-Cairns, who earned a best original screenplay nod for “1917,” said the film has been her passport to many parties and some telling moments.

“Every time I say I'm the writer of `1917,' people go, `huh?' and those people are unfailingly male. And today, not one single person in this room has gone, `huh?”' she said. “So i just want to say thank you for that.”

Karen Rupert Toliver, a producer of the nominated animated short “Hair Love,” marveled at being in the room with her industry “heroes.” Toliver was among the few nominees of colour attending the lunch in a year that produced only one nod for a non-white actor, Cynthia Erivo in “Harriet.”

Women are making impressive strides in documentaries and animation, as was emphasized by the nearly 20 guests with nods in those categories.

Julia Reichert, who earned her fourth and latest nomination for the documentary “American Factory,” summoned memories from her early career. One was hearing that a woman can control the family's shopping budget “but you don't want to give her $5 million to make a movie.”

“This is an actual quote from a producer guy back then. And how do we get from there to where we are?” Reichert said, suggesting two reasons.

“We're not accepting patriarchy, not accepting the way the males have done it. We have our own way and we're going to make our own way. The other thing is solidarity, solidarity among women,” Reichert said, drawing shouts of “Yes!” from other guests.

Some reinforced the value of sisterhood with their own stories. Kirstine Barfod, who with Sigrid Dyekjaer produced the nominated documentary “The Cave,” about a heroic doctor and her staff in war-torn Syria, said it was Dyekjaer's faith in her abilities that helped make her career possible.

Work, not awards, should be the main goal, Dern said in an interview at the lunch.

“We need to take the focus off of the lack of accolades for women and look at the lack of opportunities. You can't say five movies were made by women, and they got snubbed. Well, OK, but of the 300 guys who got to make them, there were a bunch of guys who got snubbed,” Dern said. “We need to change the numbers.”

Anita Hill, head of a commission scrutinizing sexual abuse and harassment in the entertainment and media sectors, said hearing women of proven value say they are not getting treated fairly “has inspired me to do my work even harder.”

Many guests tipped their hat to von Furstenberg, with Pascal calling the fashion magnate a woman who “takes charge every day and doesn't take `no' for an answer and built her own empire.”

Hudson saluted her for her dedication to the long-planned academy museum that is slated to open this year.

Actress Tessa Thompson, a lunch co-host, said the facility will “do justice to the stories of women in film,” a promise echoed by the museum's new head, Bill Kramer.

“We pledge to be inclusive. We pledge to tell complete, complicated stories. And we're doing it with your help,” he said. The museum's opening date will be announced soon, Kramer said.