More inclusive emoji, including one of a pregnant man, may be coming to smartphones 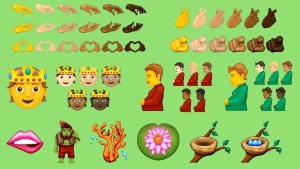 Emojipedia's interpretation of the Unicode Consortium's emoji list finalists. (From Emojipedia via CNN)

(CNN) -- More inclusive emojis may be coming to future software updates, including one of a pregnant man.

Ahead of World Emoji Day on Saturday, popular emoji reference site Emojimedia released new images of some of the emoji finalists on the radar of the Unicode Consortium, a non-profit that oversees emoji standards and is responsible for new releases.

While the consortium will formally approve in September which emojis will hit operating systems, apps and devices, Emojipedia often puts them together into a single image for people to visualize. The approved emoji will roll out across various platforms mostly next year.

The Unicode 14.0 version finalist list includes a gender-inclusive alternative to the existing emojis for princess and prince, the ability to choose from 15 different handshake skin tone combinations, and a pregnant man and pregnant person, recognizing how pregnancy is possible among some transgender men and non-binary people.

In more recent years, the consortium added a woman with a beard, a transgender flag and over 200 mixed-skin-tone options for couples to its standards.

Other 14.0 emoji candidates include a melting face, saluting face, a face holding back tears, a disco ball and a low battery symbol. However, the list is subject to change prior to final approval.

Although Emojipedia often creates interpretations of how some of the emoji may look, the official designs are decided by and vary by platform or service. That means an emoji can look very different on iOS and Android devices, for example.

In 2020, the Unicode Consortium announced version 14.0 would be delayed due to the pandemic. "Under the current circumstances, we've heard that our contributors have a lot on their plates at the moment and decided it was in the best interests of our volunteers and the organizations that depend on the standard to push out our release date," Mark Davis, president of the consortium, said in a statement at the time.

Earlier this week, Microsoft announced it is redesigning its 1,800 emoji and swapping out its existing paper clip emoji for its assistant Clippy. Meanwhile, an Adobe study published on Thursday revealed that "laugh out loud" is the world's most popular emoji, followed by the "thumbs up" and "red heart" emojis.