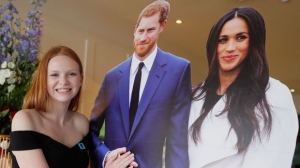 Faith Dickinson, 15, from Peterborough, Ont. poses with cutouts of Prince Harry and Meghan Markle in Windsor, England on Friday, May 18, 2018. Teenage royal wedding guest Dickinson says she's got her "dream dress" ready for the wedding. THE CANADIAN PRESS/Kirsty Wigglesworth

The Peterborough, Ont., resident is among the throngs of royal fans who have flooded the town of Windsor west of London to celebrate the union at Windsor Castle on Saturday.

But unlike most, the 15-year-old will watch the spectacle from the castle grounds, as one of seven youth associated with the Diana Award to receive a coveted spot outside St. George's Chapel.

Some 200 others from a range of charities are also invited onto the grounds, as well as more than 2,000 members of the public. Tens of thousands of other royal fans are expected to line the historic town's winding streets.

Dickinson expected she'll have a prime view of the couple's arrival, as well as their emergence from the ceremony as newlyweds.

But her day will start early -- she says she'll have to dress and complete her makeup for an 8:30 a.m. arrival at the castle.

With the wedding not set to begin until noon, and the couple's procession through town not expected until 1 p.m., it'll make for a long morning spent outside, the teen noted Friday.

"But it's all worth it," Dickinson said, adding she'll also get a chance to enter the chapel after the guests leave.

"I love them, they're a perfect couple and they do so much amazing charity work."

It'll be a whirlwind trip for Dickinson, who arrived in London on Thursday, heads to Scotland on Sunday and returns to Canada on Wednesday.

She's still in school, after all, she points out.

The Grade 10 student brought homework to tackle on the train to Edinburgh and back.

"I have to get back to school -- it's exam season so I can't miss too much," said Dickinson, who brought math, history and science work.

Nevertheless, she's soaking up as much of her fairy tale trip as possible and plans to bring a camera to snap some prime shots of famous guests.

And she gushed over her bespoke silk and lace dress by Ottawa designer Nora Pucci of the brand Zarucci, and a matching fascinator by Toronto milliner David Dunkley.

"It's a perfect outfit, my dream," she said of the dress, in mauve.

Dickinson said it was exactly one year ago that she met Prince Harry in London to receive a Diana Award for her charity work. Cuddles for Cancer provides blankets to cancer patients and veterans with post-traumatic stress disorder.

"I would never have imagined that I would be back for his wedding."