Salmonella outbreak in six provinces linked to snakes and rodents 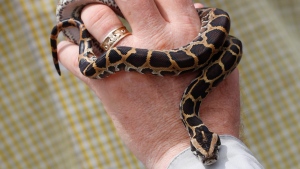 A salmonella outbreak in six provinces has been linked to contact with snakes and rodents. (FILE/AP Photo/Wilfredo Lee)

The Public Health Agency of Canada is advising exotic pet owners to practise good hygiene amid a salmonella outbreak in six provinces that's been linked to contact with snakes and rodents.

A notice issued this week counts 92 cases of the bacterial infection reported between April 2017 and October 2019.

The agency says exposure to snakes and rodents is the likely cause of the outbreak, with an investigation finding many of the affected individuals had contact with a snake, pet rat or rodent used as reptile food.

Reptiles and rodents can carry salmonella bacteria even if they seem clean and healthy, and people can fall ill from contact with the animals or places they have recently roamed, the agency says.

The health notice advises frequent handwashing and safe handling of snakes, rodents and their food - including frozen rodents used as snake food - to prevent further illnesses.

It recommends pet owners immediately wash their hands after touching a reptile or rodent, their food or their habitats.

It also advises against kissing the animals, bathing them in kitchen sinks or bathtubs, or keeping their food stored in the same place as human food - with special notice that keeping frozen rodents in a freezer near human food does not kill salmonella.

The pets should be kept in their habitats, the notice says, and it advises keen attention to the pets' needs, saying “stress for a reptile can increase shedding of salmonella.”

Children under five, pregnant women, older adults and people with weakened immune systems are at greatest risk of becoming infected with the bacteria, the agency says. The health notice advises against keeping reptiles and rodents at daycare centres or schools for young children.

Six people have been hospitalized during the outbreak, though the agency says people usually recover within a few days from symptoms that include fever, chills, diarrhea, cramps, nausea and vomiting.

Fifty-two cases were reported in Quebec and the rest were in British Columbia, Ontario, New Brunswick, Nova Scotia and Newfoundland and Labrador. The majority of cases, 57 per cent, were reported among women and girls.

The agency says cases continue to be reported.

Dr. Bryna Warshawsky, a physician with Public Health Ontario, said the findings suggest a common rodent breeder as the source of the strain. The rodents may have been sold as pets or as food for a snake, then infected a snake or person with salmonella.

“It all probably traces back to a similar breeder or a connected series of breeders, but we don't know that for sure,” Dr. Warshawsky said.

She said it's not recommended to have a pet reptile, rodent, frog or toad in a household with children under five because young children don't understand the necessary hygiene precautions.

Adults can better understand the risks, but Dr. Washawsky stressed that all pet owners should wash their hands after touching animals or their food, even when a salmonella outbreak is not ongoing.

A previous salmonella outbreak in Canada spanning from 2012 to 2014 was eventually linked to feeder rodents for pet snakes. An investigation found snake owners were thawing frozen mice in mugs and pots that they would later use for drinking or cooking, causing the infection to spread.

Wade Samson, co-owner of Dartmouth exotic pet store Into The Wild, said he hasn't heard of any of his staff or customers becoming ill with salmonella after touching the animals, but said he generally agrees with the hygiene recommendations in the notice.

“If you have something dead, you don't want to put it next to your food,” he said by phone. “I think a lot of people just avoid that because it's gross to most people.”

Samson said common sense hygiene around pets like snakes and rodents is always advisable to avoid a variety of transferable illnesses, not just salmonella.

“I always recommend simple hygiene. That has obviously saved our civilization from a lot of stuff.”