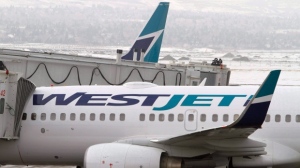 A WestJet plane sits on the tarmac at Calgary Airport on in this 2010 file photo. (Larry MacDougal / THE CANADIAN PRESS)

Onex Corp. has signed a friendly deal to buy WestJet Airlines Ltd. in an all-cash transaction of $3.5 billion.

Under the agreement announced Monday, Onex will pay $31 per share for WestJet, which will operate as a privately held company.

The two companies said the deal, worth about $5 billion including debt, will likely close in the second half of 2019 or early 2020.

WestJet founder and chairman Clive Beddoe said Onex is an ideal partner for the airline.

"I am particularly pleased that WestJet will remain headquartered in Calgary and will continue to build on the success that our 14,000 WestJetters have created," Beddoe said in a statement.

The deal comes after Onex, a Toronto-based private equity firm, approached the airline in March.

"WestJet is one of Canada's strongest brands and we have tremendous respect for the business that Clive Beddoe and all WestJetters have built over the years," said Tawfiq Popatia, a managing director at Onex.

In the past six years, WestJet has created both regional and budget airlines -- WestJet Encore and Swoop -- and set its sights on long-haul routes with an order for 10 Boeing 787 jetliners set for delivery before 2022, receiving the first one earlier this year.

"WestJet has been challenged by all this diversification that's been crunched into this very short space of time," said Robert Kokonis, president of Toronto-based consulting firm AirTrav Inc. "Shareholders were wondering whether WestJet could execute all these things."

"Onex has very deep pockets...If that means WestJet growing faster internationally, acquiring more long-haul fleets to fly abroad, those are good things and that will create a positive pricing environment for consumers."

This isn't Onex's first attempt to acquire an airline. Twenty years ago it teamed up with American Airlines parent company AMR Corp. in a hostile $1.8-billion bid plus the assumption of debt to acquire and merge Canadian Airlines -- then the country's second-biggest carrier -- and Air Canada. The plan was dropped after being ruled illegal by a Quebec court.

Onex also failed in its effort in 2007 as part of a consortium to buy Australia's Qantas Airways Ltd.

With the exception of one quarter last year, WestJet has posted quarterly profits for 14 years straight.

Analyst Benoit Poirier of Desjardins Securities said Onex might look to acquire Transat A.T. The tour operator, which owns Air Transat, competes with WestJet for sun destinations and launched in 2017 a $750-million plan to develop a hotel chain in Mexico and the Caribbean.

"We believe it would be easier for WestJet to acquire Transat once the company is integrated within Onex, as unlocking Transat's full potential could take a few years (3-5 years) -- which might be less suited for a public entity," Poirier said in an investor note.

The nearly 4,000 flight attendants at WestJet and WestJet Encore have unionized over the past year. Meanwhile, Encore pilots have voted in favour of a five-year agreement that runs until Jan. 1, 2024, and WestJet pilots agreed to a settlement process last May, auguring "labour peace," Kokonis said.

"WestJet was generally well-funded and was already embarking on a large and highly competitive expansion plan. In our view, a private equity owner of an airline is likely to remain rational with respect to its approach to yields and profitability vs. market share," he said in a note to clients.

Completion of the transaction is subject to a number of conditions, including court, regulatory and shareholder approvals.

WestJet's board of directors has unanimously recommended shareholders vote in favour of the deal at a meeting expected to be held in July.