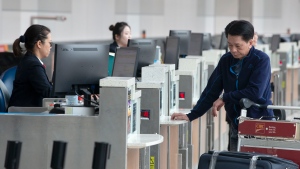 A passenger checks in for a flight at Toronto Pearson Airport, in Mississauga, Ont., Friday, May 24, 2019. New regulations requiring airlines to provide help and compensation to passengers stuck on a tarmac for hours will kick in on July 15. THE CANADIAN PRESS/Chris Young

OTTAWA -- Long-promised rules meant to help frustrated air passengers will arrive in two phases -- first this summer, and then Christmas -- but the longer wait for some rules, the ambiguous wording of others, and the exemptions for airlines have caused turbulence around the regulations before they even take off.

The first batch of regulations land in mid-July and require airlines to help and compensate passengers stuck on tarmacs for hours, including making sure there is no repeat of a 2017 incident at Ottawa's airport in which passengers were stuck in one jet for five hours and in another for six, in sweltering summer heat.

The Montreal-bound Air Transat flights from Europe been diverted to Ottawa by bad weather; uncertainty about when they might fly again kept them grounded so long that some passengers on one of the planes called 911 and asked to be rescued. The airport and airline disagreed about whose fault it was that the passengers were stranded aboard as air conditioning failed and sustenance ran out.

Air travellers will have to wait until mid-December for rules requiring airlines to seat parents beside or near their children at no extra cost, as well as compensation for flight delays and cancellations within an airline's control.

Transport Minister Marc Garneau said Friday that the rules and timelines aim to strike a balance between being fair to passengers and to air carriers.

He called the rules around cancellations "more complex," requiring a longer runway so airlines can draw up and implement new policies.

The rules provide a baseline for all carriers to follow and requirements to help the travelling public understand their rights, which both industry and passenger advocates see as pluses.

For advocates, the downside was too much time -- a six-month lag before most of the rules come into effect. "And we're disappointed by that," said Ian Jack, managing director of government relations with the Canadian Automobile Association. "We think that could have happened a lot earlier."

For the industry, the timelines were "ridiculous" in light of the need for more training and new software, said John McKenna, who heads the Air Transport Association of Canada.

New rules will require airlines to provide updates, and to return planes to gates and let people off if delays reach three hours. But a 45-minute extension is allowed if there is an "imminent" possibility a late plane will take off.

"That doesn't sound like a lot, but it is very positive. A number of captains told me first-hand they had to go back to the gate only to find out 20 minutes later that the window had just opened," said Massimo Bergamini, chief executive of the National Airlines Council of Canada lobby group, which represents Air Canada, WestJet, Air Transat and Jazz Aviation.

Starting July 15, passengers will have to be compensated up to $2,400 if they are denied boarding because a flight was overbooked, and receive up to $2,100 for lost or damaged luggage. Compensation of up to $1,000 for delays and other payments for cancelled flights will take effect in December.

"The compensation costs are now among the highest outside of Europe," McKenna said. "This is going to drive up the cost of flying in Canada."

The rules impose no obligation on airlines to pay customers for delays or cancellations if they were caused by mechanical problems discovered in a pre-flight check, rather than during scheduled maintenance. The number of issues categorized as outside an airline's control amount to a long list of ways to avoid compensating passengers, said Christian Nielsen, chief legal officer of AirHelp, a Berlin-based passenger-rights company,

"When you add to that list that pretty much all technical problems are also outside an airline's control, I'm beginning to wonder what is within the airline's control," Nielsen said. "Is it a drunk pilot, or the crew being late?"

Other consumer-rights advocates argue the criteria for monetary compensation are extremely tough to meet, requiring passengers to present evidence that is typically in the hands of an airline. Gabor Lukacs, founder of the group Air Passenger Rights, said the regulations provide airlines "carte-blanche to refuse paying compensation" based on unverifiable maintenance issues.

Garneau said it was "preposterous" that airlines would make up a maintenance problem to avoid compensating some passengers, noting the tight reporting regulations the industry must follow.